Unveiling the mystery of the “High Crosses of Ireland” 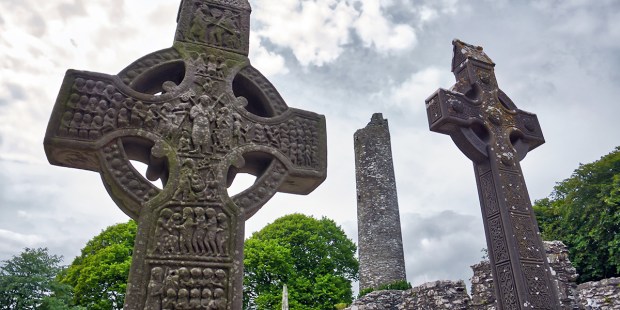 A new book sheds light on some of the most beloved Catholic artifacts of Ireland.

Built at the end of the first millennium, the “high crosses of Ireland” are iconic cultural landmarks of the green isle. Yet, little is known about them. In an upcoming book, Roger Stalley, Professor Emeritus of Art History at Trinity College, Dublin, has collected the results of his research and insight into some of the most beloved Catholic artifacts of Ireland. Stalley discusses his research for his new book, Early Irish Sculpture and the Art of the High Crosses, in an article in the  Irish Times. Here are a few highlights.

1. The Great Cross at Monasterboice

As written in its inscription, this cross was commissioned before 924. Professor Stalley writes in the Irish Times that the author shows a remarkably naturalist approach, featuring finely tuned details like swords, horns and brooches. The same style can be found in six other crosses, located in Kells, Clonmacnoise and Durrow (Offaly).

In the Irish Times, Stalley notes how commonplace assumptions about medieval art, such as its lack of innovation and creativity, are disproved in the works of the “Muiredach Master,” as the anonymous author of the high crosses is called. In the engraving of the last judgment found at Monasterboice, he shows creativity and humor by featuring demons kicking the souls of the evil and men pulling each other’s beards.

For a long time, historians could not locate the precise location where the massive block of quartz sandstone used for the “Great Cross” was sourced. In the Irish Times, Stalley points to recent geological evidence suggesting that the stone could have come from a hill at Carrickleck, 14 miles down the road from the site of the Great Cross.

Another long-standing mystery tackled by Stalley, and described in the Irish Times, revolves around the intricate carving of the massive stones. Were the carvings made before or after the stone was lifted from the ground? Stalley argues that they were probably made before the stone was pulled upright, noting that parts of the cross could not have been carved otherwise.

5. A pump drill was used

As Stalley explains in the Irish Times, some of the engravings reveal the use of a refined set of sculpting tools, including the pump-drill, already in use in ancient Greece.

6. Erection of the cross

The head of the Monasterboice cross had to be dropped vertically from a high place, a daunting challenge that, according to Stalley, involved a 30-foot tall hoist.

7. Crosses came from a high patronage

The refined engravings of the cross set them apart from normal sculptures. Stalley cites an expert who described the “high crosses of Ireland” as “icons taken down from a church and stuck on the face of a cross.”

Most medieval art came with short inscriptions describing the work. But Irish crosses did not need any explanation. As Stalley explains, their message was probably so well known to local communities that no inscription was needed.

10. Conservation may move them indoors
The growth of lichen in recent years has put the preservation of the Irish crosses at risk. For this reason, Stalley thinks that some of these iconic outdoor monuments may eventually be moved indoors to ensure their preservation.