Lost medieval Italian church to rise from Lake Vagli in 2021 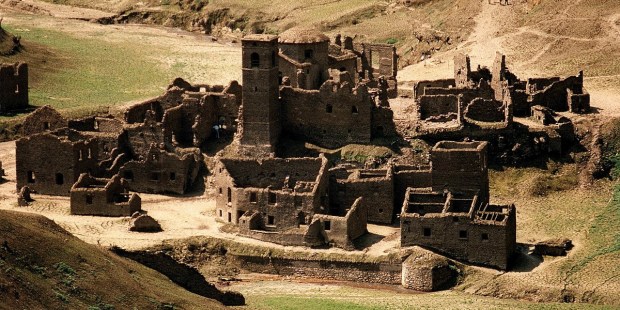 The town has only been fully exposed four times in the last 70 years.

The ruins of a medieval Italian town that was submerged in the early 20th century to make way for a hydroelectric dam will make a rare appearance in 2021, as the dam will be drained for maintenance. The lost settlement, named Fabbriche di Careggine, was last exposed in 1994, during a similar round of repairs.

Formed in the 13th century by a group of blacksmiths, Fabbriche di Careggine was once famed for its iron working. In the mid-20th century, the iron industry experienced a dip, and the demand for electricity was growing, so the residents were displaced and the town was sacrificed in order to pave the way for hydroelectricity.

Now the town is a ruin below the surface of Lake Vagli, only viewable on days when the water is clear enough or during rare times when the lake is drained to tend to the dam. Spellbinding Italy reports that the lake has only been drained four times since its inception, in 1958, 1974, 1983 and 1994.

Although Fabbriche di Careggine has been submerged for more than 70 years, the town’s layout can still be clearly seen. There are 31 buildings that have lost their roofs, but their stone walls remain as echoes of the town’s former splendor. The only building that appears to have kept its ceiling is the Church of St. Theodore, with its ruined bell tower, which sometimes can be seen jutting up from the water on days when the level lowers.

During the 1983 draining, the site was opened to the public. In the video featured below, photos show visitors exploring the uncovered town. The photos show a ghost town, but it seems much better preserved than we would have expected, with the Church of St. Theodore remaining nearly in its original form.

There have been wonderful advancements in videography in the nearly 40 years since Lake Vagli was last drained, and we can’t wait to see what kind of shots modern methods such as drones might capture. Unfortunately, we will have to wait until next year to see such images, but until then, we can check out this old footage from 1947, when the lake was first filled. The sight of the church and bell tower slowly sinking beneath the water is made all the more somber by the black-and-white pictures.