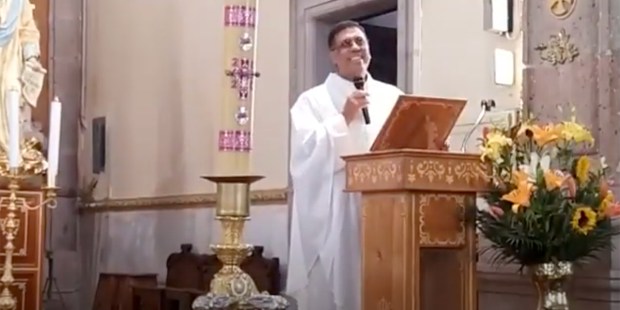 The pontiff reached out to Fr. Miguel Domínguez while he was in the middle of Mass.

Recently, Fr. Miguel Domínguez of Assumption Parish of Jalostotitlán was in the middle of reading the Gospel during Mass when he got a phone call. The priest pulled the phone from his cassock and immediately made his way to the sacristy to take the call.

Now, you might be thinking that that isn’t the best occasion to take a phone call — and you’d be right. Phones should be switched off during Mass. However, when you have the Holy Father on the other end of the line, it’s pretty much much like having to answer an urgent call from your big boss.

Fr. Domínguez had a brief chat with the pontiff (there’s a translation below) and came back to the lectern with a big smile on his face. He relayed to his parishioners that it had indeed been Pope Francis on the phone, to which the congregation applauded.

The conversation was a basic catch up. It was a similar to a caring employer taking an interest in his employee, motivating him in his work day. And looking at the smile on the priest’s face, you could see it worked. Yet the gesture also surely served to give the parishioners a little boost.

At a time that has been so difficult for the faithful to attend Mass, this short phone call showed the priest and those attending Mass that they were important to the pope, even thousands of miles away.

The conversation itself was also revealing in that it showed another key management skill: humility. By asking Fr. Dominguez to pray for him, Pope Francis shows that he needs support too. We all need each other, no matter who we are.

Here’s a translation of the phone call, published in Church Pop:

“I am preparing for Mass,” Fr. Dominguez said.

However, the Pontiff specified, “No, what do you do?”

“Ah, I am a pastor, in a parish in my diocese,” Fr. Dominguez clarified.

“Give my regards to your parishioners,” Pope Francis concluded. “And blessings. And pray for me. God, with what he has given you, has blessed you so much. I remember you a lot.”

The priest apologized after returning to the ambo. He added, “Well, we applaud the Pope, right?”

Read more:
The only time management trick you really need