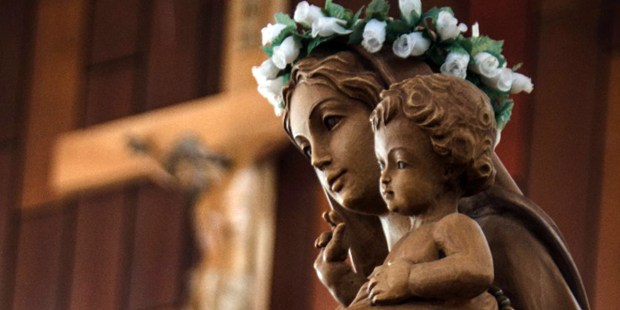 St. John Paul II was one of the strongest advocates for officially celebrating Mary’s role as mother of all the Christian faithful.

In 2018, Pope Francis instituted an annual celebration on the Monday following the feast of Pentecost called, “Mary, Mother of the Church.” The decree announcing the celebration explains that, “This celebration will help us to remember that growth in the Christian life must be anchored to the Mystery of the Cross, to the oblation of Christ in the Eucharistic Banquet and to the Mother of the Redeemer and Mother of the Redeemed, the Virgin who makes her offering to God.”

While the liturgical celebration is new, the desire for an official recognition of this title of Mary has had many supporters over the years.

For example, St. John Paul II advocated for this title on multiple occasions. He first mentioned it in his encyclical Redemptoris Mater, where he recalled the words of St. Paul VI in reference to this title.

At the [Second Vatican] Council Paul VI solemnly proclaimed that Mary is the Mother of the Church, “that is, Mother of the entire Christian people, both faithful and pastors.” Later, in 1968, in the Profession of faith known as the “Credo of the People of God.” he restated this truth in an even more forceful way in these words: “We believe that the Most Holy Mother of God, the new Eve, the Mother of the Church, carries on in heaven her maternal role with regard to the members of Christ, cooperating in the birth and development of divine life in the souls of the redeemed.”

He later explained in a general audience in 1997 that, “Pope Paul VI would have liked the Second Vatican Council itself to have proclaimed ‘Mary Mother of the Church, that is, of the whole People of God, of the faithful and their Pastors.’ He did so himself in his speech at the end of the Council’s third session (21 November 1964), also asking that ‘henceforth the Blessed Virgin be honored and invoked with this title by all the Christian people.'”

In particular, St. John Paul II strongly favored this title of Mary because of its ability to shape the Church, desiring that the Church would look to Mary as a model for imitation. He explains this first in Redemptoris Mater.

[A]s Christians raise their eyes with faith to Mary in the course of their earthly pilgrimage, they “strive to increase in holiness.” Mary, the exalted Daughter of Sion, helps all her children, wherever they may be and whatever their condition, to find in Christ the path to the Father’s house.

The Church, then, looks to Mary as a supreme example of faithfulness, but also of motherhood. Mary’s love for all humanity directs the love of the Church and shows the Church how to take care of her children.

John Paul II firmly believed that this appellation of Mary was vital for the ministry of the Church and would have been pleased to see it emphasized in the new liturgical celebration that follows Pentecost.

Read more:
A beautiful prayer to Mary left by St. John Paul II as a legacy to families