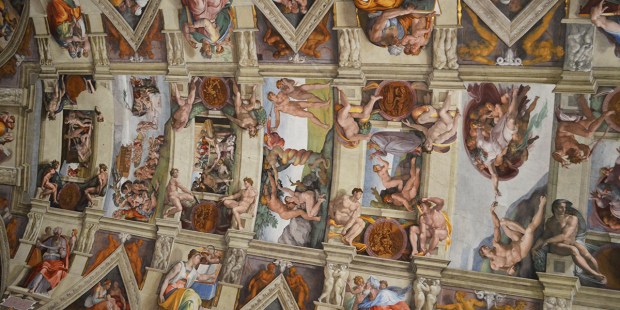 After being closed for three months due to the coronavirus, art galleries show off newly restored Raphael paintings.

The Sistine Chapel and the Vatican Museums reopened to the public Monday, after being closed for three months due to the coronavirus pandemic.

The numbers admitted to the museums were far fewer than in pre-pandemic days, in order to allow social distancing as Italy continues to make efforts to control the spread of the virus. That meant some 1,600 people, who had to reserve tickets ahead of time, had the luxury of viewing the museums’ Renaissance masterpieces in relative leisure.

Normally, there are about 10 times as many visitors to the Vatican Museums on a single day. Now, only about 25 people at a time are allowed in the Sistine Chapel, with its famous ceiling and Last Judgement panel painted by Michelangelo in the 16th century. That provides more “breathing room” than even the 120 or so cardinals have in a typical conclave in the chapel, where new popes are elected.

Visitors had their temperatures checked and were required to wear a mask.

For Marisa, a Roman who declined to give her last name, that was a small price to pay. “The Vatican Museums are usually inaccessible because of the huge crowds of tourists, particularly foreigners,” she told Reuters. “We took advantage of the fact that there are not many tourists to see the beauty that is in here, and it was very emotional.”

For aficionados, the reopening had extra value in that it was the first time most people would see newly restored frescoes in the Raphael Rooms. Two paintings that were previously thought to be by students of Renaissance painter Raphael have been determined to be by the master himself. They are allegorical depictions of the virtues of Justice and Friendship and bear their Latin names, Iustitia and Comitas. Restoration work that began five years ago led experts to the conclusion that the paintings were done in Raphael’s own hand.

“Today is a way that we can in some way share [beauty] with the entire world … thanks to Raphael,” Vatican Museums Director Barbara Jatta told Catholic News Agency Monday. “It is a joy, and it is, of course, a part of our work, but after the lockdown — after the pandemia — it is more a joy.”