Things have gone from bad to worse for Syrian Christians, but help is on its way 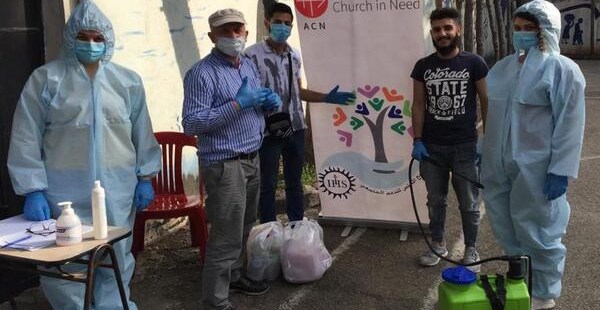 During the nine years of the civil war, the Syrian Christians have suffered greatly. Aid to the Church in Need (ACN) has just launched a new emergency aid program to assist families in need.

The continuing emergency facing Christians in Syria has been further exacerbated by the coronavirus pandemic. To mitigate its impact, Aid to the Church in Need (ACN) has launched a new $550,000 aid program to support 20,550 Syrian Christian families in grave need.

The emergency plan will benefit various denominations—Catholic, Orthodox and Protestant. Help is sorely needed as lockdown measures have plunged many families into a crisis, while straining the financial capacities of the local churches in Syria to the very limit.

“Each family will receive a one-off subsidy of some $28 so that they can purchase essential foodstuffs and articles of hygiene to protect themselves against the coronavirus. This may not seem much, but it represents approximately half the monthly income of an average Syrian family today and is thereby a lifesaver.”

“This emergency support will reach many people. However, it must be implemented without delay, before the pandemic spreads throughout the entire country,” explains Thomas Heine-Geldern, the executive president of ACN International.

The aid program covers seven separate projects and reaches various locations. Those supported by the program include many people from bombed-out cities that were heavily damaged during the civil war—for example, 6,190 families from Aleppo and 7,680 from Homs; but it will also help some 400 families from the towns of Al-Hassakeh and Al-Qamishli in northeastern Syria, where fighting continues.

“We are still supporting more than a hundred other projects, both small and large, in Syria,” said Heine-Geldern, adding: “Some have had to be cut back on because of the pandemic, but many are continuing, for example our project Drop of Milk, which supplies hundreds of babies and small children with vital milk rations.”

“We believe that this new aid program will be an important signal of encouragement for our brothers and sisters in this country, giving them spiritual comfort as well as financial support.”

Many people in Syria have already reached the end of their strength, as a result of the war and the ongoing economic sanctions. But now they have to face a new enemy, the coronavirus. “We are not going to abandon the Christians in Syria now,” insists Heine-Geldern.

During the nine years of the civil war, the Syrian Christians have suffered greatly. Prior to 2011 discrimination of Christians was rare, and there was only a limited number of Christian families choosing emigration. However, today Christians feel they have become second-class citizens, abandoned by the government and discriminated against by other Syrians.

During the war, Christians’ properties and possessions were destroyed, looted or sold off cheaply. Many have lost their jobs. On account of sanctions and closure of borders, it is difficult to get outside aid into the country. There is runaway inflation in Syria. On top of this, the banking system in neighboring Lebanon, which to some degree kept the system going in Syria, has collapsed because of that country’s own political and social crisis.

Then the pandemic hit.

This article was first published by Aid to the Church in Need, and is republished here with kind permission. To learn more about their mission visit www.churchinneed.org