Hong Kong bishop at Tiananmen memorial: “The people before the government; the truth before interests.” 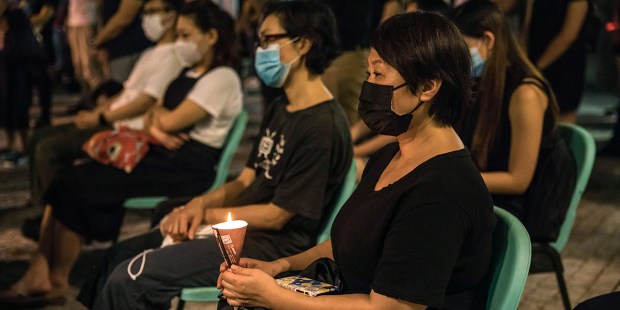 In spite of ban on protests, thousands turn out to commemorate June 4, 1989, massacre.

As protests against police brutality continued around the world, with speakers and placards reminding people that “Black lives matter,” a Catholic bishop in Hong Kong explained during a prayer service how no political power is more valuable than a person’s life.

“Man is created and loved by God, so that the value of man is far more important than any other institutional value,” said Auxiliary Bishop of Hong Kong Joseph Ha Chi-shing. “The people before the government; the truth before interests.”

Bishop Ha spoke in a very different context than the protest rallies that sprang up in the wake of the death of George Floyd, a black man in Minneapolis who died after a white policeman allegedly pressed his knee on his neck for almost nine minutes. The Hong Kong bishop spoke during a Catholic Mass in which people remembered the June 4, 1989, crackdown on protests in Beijing’s Tiananmen Square.

After a month and a half of student-led protests calling for political reform, which came to be called the “Beijing Spring,” Chinese police and military cleared the square on the night of June 3-4, 1989. Hundreds, if not thousands, of protestors lost their lives. An official death toll has never been determined, and Chinese authorities have tried to sweep the incident under the rug, ordering that it not be included in school history books and banning annual commemorations of the incident.

This year, as Beijing has tried to orchestrate more restrictions on its Hong Kong territory, officials banned the June 4 commemoration, citing concerns about the spread of the novel coronavirus. But tens of thousands of people turned out anyway, and many people held candles from the windows of their apartments.

Beijing had pressured Hong Kong to adopt a new security law for the territory, giving Hong Kongers added impetus to turn out for protests.

According to reports, seven churches in the Catholic Diocese of Hong Kong held commemorative Masses looking back at the Tiananmen Square incident 31 years ago. Bishop Ha presided at one, at Holy Cross Church in the Sai Wan Ho section of Hong Kong island. AsiaNews reported that thousands of people attended, filling both the church and in the square in front of it.

“What makes us gather every year on the same day to pray together?” asked Ha, in a homily translated by AsiaNews. “As Christians, everything we do is in response to the teachings of Jesus Christ. Today’s Gospel shows us the most important commandment of the Lord Jesus Christ, namely to love God and love one’s neighbor. Not only does He say it, but He shows it to us with His own life, His own death, what it truly means to love God and neighbor with all of Himself.”

There might never be a full investigation and justice for the Tiananmen massacre, Ha said, “but faith tells us that the most important thing is to do the will of God, and His will is this request to love the Lord and neighbor, because man is created and loved by God, so that the value of man is far more important than any other institutional value: the people before the government; the truth before interests.”

He said that the protestors of 1989 “sacrificed themselves not for their own interests, but for the future of the country, of the people. They said, ‘This country is our country, this people is our people. If we do not become involved, who will? If we don’t do it, who else will do it?'”

But, he lamented, although China has experienced “real prosperity and progress” since then, with a marked improvement in living conditions, “many other social problems have arisen that lead us to reflect on the insufficiencies of political reforms. Unfortunately, the reforms of the political system ended with the June 4 movement. From that moment on, the reforms have been mainly economic, ignoring the political ones, and the social problems of that time have dragged on until today, perhaps they are even more serious.”

Because “loving God and neighbor is the most important commandment, and man is created and loved by God, then man does not need bread alone,” he said. “We pray for the nation and the people, so that we can build a society that respects human dignity, while we pursue material wealth.”

He said that the approval of the national security law for Hong Kong has “further aggravated the situation in Hong Kong, making it even more critical, the path becoming increasingly difficult. … Freedom of expression seems to shrink more and more. Could this be the last commemoration Mass in memory of June 4th? I do not know. No matter how difficult it will be in the future, we must know that we are Christians, we are children of God, that He is always with us and walks with us, He gives us strength for our missions, continuing to love God and neighbor even in adversity.”