How Moses the Black went from gang leader to holy abbot 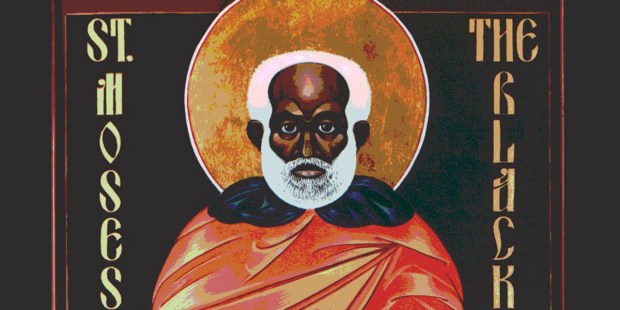 St. Moses was enslaved, committed murder, became leader of a gang, and then changed his ways forever.

An ascetic monk born in Ethiopia in 330, Moses the Black is known as a “Desert Father” and is venerated in particular in the Eastern Orthodox Churches.

However, Moses didn’t start out a monk, and for most of his early life lived on the wrong side of the law.

According to Palladius of Galatia in a history he wrote of the Desert Fathers in the 5th century, Moses was “a house-servant[slave] to a government official. His own master drove him out because of his immorality and brigandage. For he was said to go even the length of murder.”

Forced out on the streets, Moses quickly became the leader of a gang and was notorious for violence and robbery.

One day Moses “plotted vengeance against a shepherd who had one night with his dogs impeded him in a project. Desirous to kill him, he looked about to find the place where the shepherd kept his sheep.”

The shepherd escaped from Moses, who ended up seeking shelter in a local monastery.

After witnessing the devout lives of the monks, Moses renounced his old way of violence, was baptized a Christian and joined the community.

He dedicated the rest of his life to prayer as a leader of a group of hermits in the desert.

However, his past did come in handy when a group of robbers tried to overpower him in his cell. Moses was able to fight back and dragged them to the chapel. The robbers were astounded by what happened, converted to the Christian faith and eventually joined the community of monks.

Moses is venerated by many Christians around the world and is regarded by many as a patron saint of nonviolence.