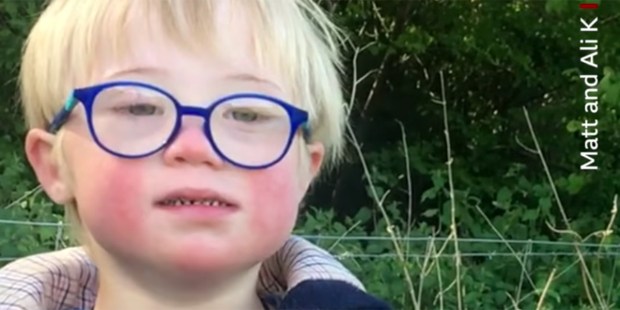 As many struggle with quarantine, there’s a joy to be had in knowing other vulnerable people are thriving.

Many people have struggled during the quarantine period, and for many reasons. So when there are stories of vulnerable people thriving during this challenging period, it can inspire us all.

This is the case with 4-year-old Zachary, whose mom Ali shared with the BBC that this time in quarantine has proved to be her son’s healthiest throughout his short life.

Having Down syndrome means that Zachary is prone to infections (among other medical issues), has speech delays, and hasn’t developed as quickly as he may have because of various setbacks in his health. Yet over these last few months, Zachary has achieved new milestones and as his mom shares in the video below, has better skin and shiny eyes.

It comes as a relief for the young family who also deals with the health issues of Matt, Zachary’s dad. After a brain injury, he now suffers from regular seizures that are made worse from infections.

The family is staying with Matt’s elderly parents and are appreciative of how this enforced time together is doing wonders for Zachary. His parents believe that due to the lack of normal bugs he picks up, Zachary’s physical health has improved so much that he’s able to gain in physical strength, while improving his communication skills.

Matt also points out that the quarantine period has had a positive impact on the family emotionally. Not only is the couple grateful for the support given to them by Matt’s parents, it’s allowed a healthier Zachary more time to bond with his brother Joseph and share playtime together.

It’s heartwarming to see a group of vulnerable people living together and thriving in such circumstances. Ali shared: “I did battle with a bit of guilt thinking: For once we’re not being rushed to hospital in ambulances. But then just actually really grateful.”

We don’t think anybody would begrudge her this moment of joy and good health, which will hopefully continue when life returns to normal.

Read more:
Watch these adorable twins with Down syndrome take “the temptation challenge”

Read more:
Mother of daughter born with Down syndrome: “You’re made to feel their life is valued less”