Religious freedom is theme of weeklong campaign by US Catholic bishops 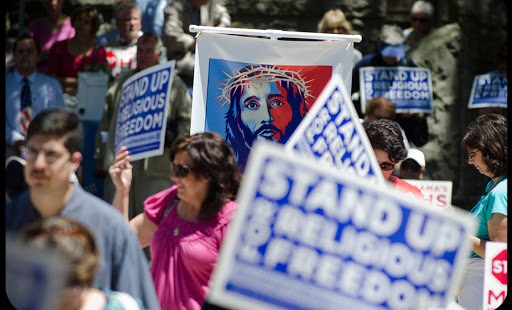 The bishops are asking people to pray for religious liberty over eight days starting on June 22.

The issue of religious liberty takes many forms, and that point is driven home by a campaign by the Catholic bishops of the United States. Religious Freedom Week, beginning June 22, invites people to pray in support of religious liberty over eight days — each day featuring a different theme.

Those themes include some that the Catholic Church in the United States has been highlighting for some time, such as the fight for religious groups to conduct their mission without a legal requirement to provide services that conflict with their convictions. It also continues to call attention to religious freedom violations in countries like China.

But the week concludes with a theme that many people might not expect: the need for civility in political discourse.

“Pray that God would give us the grace to remember the dignity of all and invite others to do the same,” the theme for June 29, “Civilize it,” urges participants. “As Catholics, our strong tradition of social teaching compels us to be actively engaged in the building up of our communities. This is achieved by being involved in the political process—and yet today, many shy away from such involvement because our national and local conversations are filled with vitriol and harsh language, often directed at people themselves. When personal attacks replace honest debate, no one wins. This kind of attack, no matter the reason, only serves to further divide our communities. What is needed is good, honest, civil dialogue. This means that we must treat everyone as worthy of being at the table, worthy of our respect, and worthy of being heard. In short, it means treating everyone as our neighbor.”

The explanation for the day invites readers to join the United States Conference of Catholic Bishops’ Civilize It Campaign “to help promote dignity beyond the debate.”

Another theme calls attention to a border wall dispute in Texas.

“Efforts to construct a barrier on the southern border have met resistance from the Catholic Church in Brownsville,” says the page for June 26. “The proposed barrier would run through land owned by the Diocese [of Brownsville], and so the federal government would have to take the land in order to build the wall or fence. Freedom of the Church means that the Church cannot be impeded by the civil authorities from engaging in her mission. That mission includes ministry to those fleeing violence and poverty. As Bishop Daniel Flores of Brownsville told the Wall Street Journal, ‘I don’t want to use church property to say that no matter how dire your life is, you cannot be received here. … The government is going to have to take the land. The Church is not going to give it them.’”

June 23: Respect for Houses of Worship