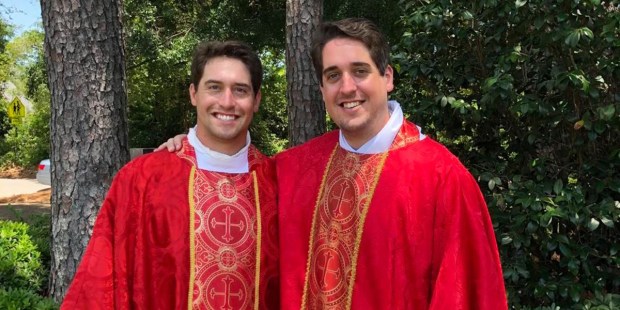 Peyton and Connor Plessala credit the support of their family for their clerical vocations.

Two brothers who attended seminary together have also crossed the finish line in tandem, as they were both ordained Catholic priests in the same ceremony. Peyton and Connor Plessala, who are aged  just 18 months apart, were both ordained to the priesthood at the Cathedral Basilica of the Immaculate Conception in Mobile, Alabama, on May 30.

A report from Catholic News Agency’s Jonah McKeown explains that Peyton and Connor were both drawn to their vocation during a high school trip to the D.C. March for Life, thanks to the fine example of their chaperone, a young priest fresh from the seminary. The Plessala brothers were so taken with the priest’s joyful outlook and enthusiasm that they began to seriously consider a call to priesthood.

McKeown notes that for Connor, this was the end of his discernment, as he decided to attend Louisiana’s St. Joseph Seminary College immediately after graduation. For Peyton, however, his calling would not come to fruition for another three years, during which time he studied pre-med at LSU. It wasn’t until Peyton returned to take the same March For Life trip with the same priest chaperone that he was sold on the priesthood. He told CNA:

“And the moment I heard that, my heart felt more at peace than it had in … maybe ever in my life. I just knew. In that moment, I was like, ‘I’m going to go to seminary,’” Peyton said.

Although they joined the seminary at different times, Peyton’s college credits from LSU put them both in the same graduating class.

In the interview, the pair said the stability of the family and the support of their parents was hugely influential to their decision. They said their faith was formed through nightly family dinners and weekly Mass attendance.

There are no words to adequately express the joy in my heart. This has been the most beautiful weekend, celebrating the…

Unfortunately, their ordination had to be held in private because of the world pandemic. In an announcement from the Archdiocese of Mobile, Connor refused to let the empty church get him down, enthusiastically stating:

“This is definitely not how we all envisioned May 30 to look, but at the same time, the important thing is (we’re) still being ordained,” Deacon Connor Plessala said. “Fortunately, priesthood is a lifetime, so we’ll be able to celebrate the priesthood for many years to come.”