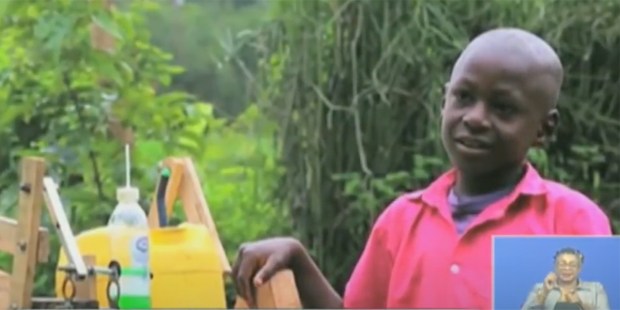 And a future career …

At just 9 years of age, Stephen Wamukota wanted to do his part in fighting the new coronavirus. Having seen the different ways to avoid contracting the virus, Stephen decided to make his own hand-washing machine that would limit the amount of physical contact required to use the machine.

The resourceful boy from Mukwa village in western Kenya created a machine that functions with a wooden foot pedal. By using it, those wanting to wash their hands don’t have to physically touch the surfaces, and this therefore limits the spreading of the disease.

Impressively, Stephen didn’t get any adult help. In fact, he found some wood that his dad bought to make a window frame and set about designing his machine. When his dad returned from his job as a carpenter he had a little surprise!

“The concept was his and I helped tighten the machine. I’m very proud,” Mr Wamukota explained to the BBC.

Mr. Wamukota posted his son’s invention on Facebook, where it garnered a lot of interest, ending in Stephen being the youngest recipient of the Presidential Order of Service, Uzalendo (Patriotic) Award.

Stephen has made a total of two machines so far and to date nobody in his village has contracted the virus. The schoolboy wants to go on and follow his inventive ways by becoming an engineer, and the county governor has assured him he’ll receive a scholarship to achieve his goal.

While it’s wonderful to see how a father’s positive influence has given his son the skills and confidence to help others, it’s great to see that this gesture will enable Stephen to achieve his dreams later in life.

Read more:
Over 100 scientists call for COVID-19 vaccine to be in the public domain