Is evil just a myth? 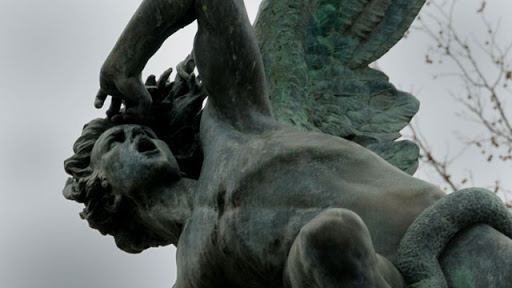 The Greeks didn’t think so, and neither should you.

Which phrases should you be on your guard against? Which words, upon hearing them, should stir up in you a combination of curiosity, suspicion, and caution? I suggest that you should be especially alert whenever someone dismissively says, “That’s just …!” Some examples may help!

Each of these phrases, and those like them, are saying: “I’ve decided not to think about this! And with these words I unabashedly and irrevocably banish you and your unwelcome words, ideas, data and suggestions! Because thinking—especially about these kinds of things—is hard! And uncomfortable! So go away!”

We’ve all encountered such conversation-enders. If we dare be honest with ourselves, we might have to confess that we have uttered a few of them ourselves, at least in our less-than-best moments. I want to draw your attention to one more verbal dismissal. This one in particular can obscure from our vision some especially important truths. How many times have you heard this?

The speaker is trying to dismiss what you are talking about as a mere myth—that is, an entirely contrived, intrinsically untrue and impossible account of what cannot possibly be real or true and is told only with the intent to deceive. But myth, properly understood, is never “mere.” A myth, at its best, discloses great truths by appealing to imagination, to heart and to wonder.

I think of these things because recently I had the great pleasure of interviewing well-known author Father Dwight Longenecker about his most recent book, Immortal Combat: Confronting the Heart of Darkness. (You can listen to our interview, and find show notes as well, HERE.)

In this book, which looks at spiritual warfare and the struggles within every human soul, Father Longenecker makes use of certain illustrations taken from Greek mythology. Why does he do so when writing in a specifically Catholic context? I think that the answer to that question can be found in author Flannery O’Connor’s answer to the question, “Why do you write novels?” She replied: “Because I’m good at it. And because I want to say some things that can only be told through story.”

Similarly, Greek mythology is good at conveying truths in a way that is effective, memorable and communicable. No mere recitation of facts, nor a description of bloodless hypotheses, Greek myths convey their content with a vividness that stirs up powerfully the senses, the imagination and the heart. Because these myths are so effectively affective, they are easy to remember and relive, and therefore are easily re-told. That’s why I think that Father Longenecker’s choice to make use of Greek mythology to relate truths about Christian spiritual warfare was a wise one.

In brief: The anima threats to souls are represented by three sisters/witches/monsters known as the Gorgons. They are Medusa (Resentment), Stheno (Rivalry) and Typhon (Revenge). These ugly inner stirrings of the soul can lead to ugly and violent actions. The outward movements are the work of animus.

Father Longenecker makes use of the story of Cerberus, the three-headed dog that is the guardian of Hades, to depict a fundamental aspect of the fallen human condition in terms of animus, that is, the active, outward-oriented dimension of the soul. As Father Longenecker tells it, the three heads of Cerberus are Pride, Power and Prejudice. Pride is the absolute assertion, “I am right!” Pride is the first head of Cerberus. The second head is Power—the unchecked will placed in the service of Pride. The third head is Prejudice—the unquestionable conviction that because I am right, everyone else can only be wrong. In just a few paragraphs, Father Longenecker conveys what every honest human knows and about which philosophers and theologians have written at seemingly interminable, yet often unmemorable, length.

When these two dimensions of the sinful soul—animus and anima—are combined, and they are in every human being, what we have is the terrifying mythological creature called “Geryon.” Geryon is a powerful, shape-shifting giant, but one who always has a respectable, smiling, “honest” face. Geryon is the consummate liar, who is not only capable of convincing others, but has also convinced himself. He believes his own lies about you, about the world and about himself.

When I write next, I will talk about Father Longenecker’s advice on how to win spiritual combat. Until then, let’s keep each other in prayer.

Read more:
Pope Francis on why our stories are so important

Read more:
‘Charlotte’s Web’ gave my son a first taste of suffering, and it nearly killed me