What is the purpose of the Rosary? 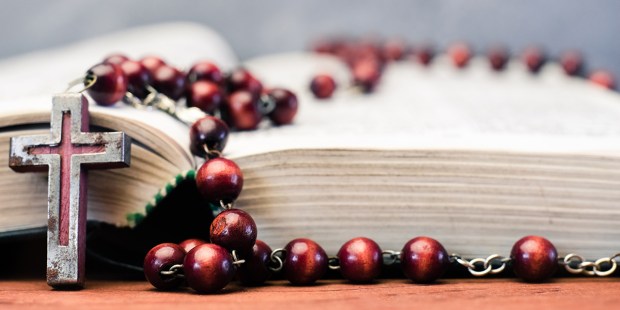 The beads of the Rosary help count prayers, but are also designed as a meditative aid bringing you closer to Jesus.

The Rosary has been a popular devotion among Catholics for centuries, but sometimes the purpose of the Rosary is obscured.

While the exact origin of the Rosary is often debated among Church historians, what is certain is how the Rosary is meant to be used.

The short answer is that the beads of the Rosary were used by the laity to keep track of the number of prayers they recited. This is the natural explanation behind the purpose of the Rosary, but there is also a supernatural answer.

St. John Paul II was an ardent promoter of the Rosary and summarized the primary goal of the Rosary in his encyclical, Rosarium Virginis Mariae.

The Rosary, though clearly Marian in character, is at heart a Christocentric prayer. In the sobriety of its elements, it has all the depth of the Gospel message in its entirety, of which it can be said to be a compendium. It is an echo of the prayer of Mary, her perennial Magnificat for the work of the redemptive Incarnation which began in her virginal womb. With the Rosary, the Christian people sits at the school of Mary and is led to contemplate the beauty on the face of Christ and to experience the depths of his love. Through the Rosary the faithful receive abundant grace, as though from the very hands of the Mother of the Redeemer.

Fr. John Procter, in his early 20th-century book The Rosary Guide for Priests and People, echoes this goal of the Rosary to bring souls closer to Jesus Christ.

“Preach the Gospel to every living creature,” was the commission of the Divine Master; by the preaching of the Rosary the minister carries out to the letter His Master’s word. For what are the mysteries of the Rosary but an epitome of the Gospel? What but fifteen chapters summarizing the history, the life, the teaching of Jesus Christ? What but that life and teaching in brief, adapted to the capacities of young as well as of old, and to the understanding of the unlearned as well as of the learned?

These are the mysteries which are comprised in the Devotion of the Rosary. We have called them “Gospel Mysteries,” and we have said that they preach Jesus Christ, His Incarnation, His Life, His Redemption, and His triumphs to the world.

This purpose of the Rosary is fulfilled by the meditating on the Mysteries of the Rosary while the individual recites the prayers and keeps count on the beads. It can lead to a profound experience in Christian meditation, deepening one’s knowledge and love of Jesus Christ.

Read more:
How to use the Bible when praying the Rosary