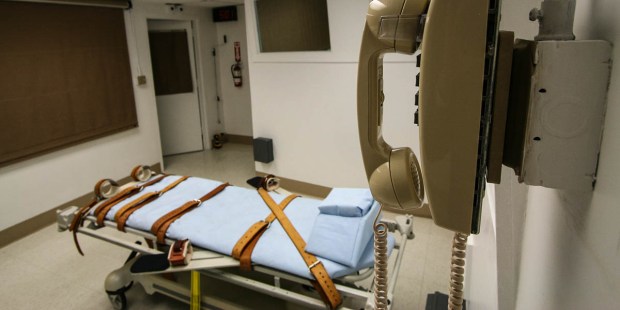 The Supreme Court of the United States issued a temporary stay of execution for a Texas death row inmate because he was not allowed to have a chaplain present at his death.

Ruben Gutierrez, 43, was scheduled to die by lethal injection in Texas on Tuesday. He had been convicted of the murder of an 85-year-old woman 22 years ago.

“The application for stay of execution of sentence of death presented to Justice [Samuel] Alito and by him referred to the Court is granted pending the disposition of the petition for a writ of certiorari,” the high court ruled in its unsigned order.

The court’s order came about an hour before Gutierrez was to be executed. His lawyers had argued that his religious rights were being violated because Texas’ prison system barred chaplains from entering the execution chamber with condemned prisoners. Gutierrez’s attorneys said that he, a Catholic, required the accompaniment of a chaplain at the time of death.

Texas’s policy in the past allowed only Christian and Muslim chaplains to accompany the condemned into the execution chamber. In 2019, the Supreme Court halted the execution of a Buddhist prisoner when he was denied a spiritual adviser’s presence. The Texas prison system then changed its policy, permitting only prison security staff into the chamber.

Last Friday, the Texas Conference of Catholic Bishops asked the U.S. Court of Appeals’ Fifth District that Gutierrez be provided access to clergy during his execution. Monday, the Conference filed an amicus brief with the U.S. Supreme Court, supporting Gutierrez’s First Amendment rights.

“To deny a prisoner facing imminent execution access to spiritual and religious guidance and accompaniment is cruel and inhuman. It is an affront to the moral and religious dimensions of human dignity, which are clearly protected by the First Amendment to the Constitution,” explained Bishop Daniel Flores of Brownsville, in a statement.

“As a devout Catholic, Mr. Gutierrez’s faith requires the assistance of clergy to help him pass from life into afterlife. The Texas Department of Criminal Justice changed its policy for its own convenience, but spiritual comfort at the time of death is not a convenience; it’s a protected legal right,” Shawn Nolan, one of Mr. Gutierrez’s attorneys, told the Associated Press after the stay was granted.

The Supreme Court is continuing to review Gutierrez’s case and is expected to issue a final ruling at a later date. If that ruling is favorable, a lower court “should promptly determine, based on whatever evidence the parties provide, whether serious security problems would result if a prisoner facing execution is permitted to choose the spiritual adviser the prisoner wishes to have in his immediate presence during the execution,” the court said.