First Englishman to offer Mass in America had colorful history 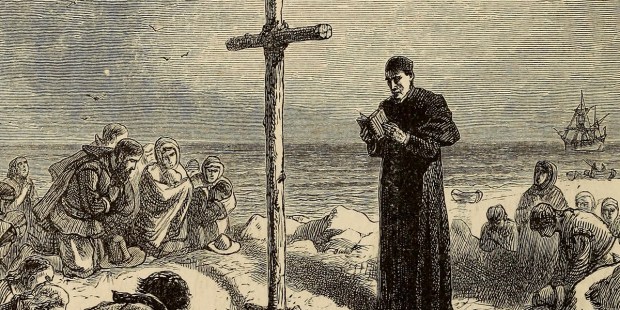 Fr. Andrew White offered thanksgiving liturgy upon arrival in Maryland on feast of the Annunciation.

The first Catholic Mass celebrated in the territory that is now the United States of America was apparently in 1541, when Fr. Juan de Padilla accompanied Francisco de Coronado on his expedition to North America.

Though the Mass was in Latin in those days, the Gospel might have been read aloud in Spanish.

It wasn’t until 123 years later that the liturgy was offered in what is now U.S. territory by a priest whose native tongue was English.

Fr. Andrew White was born in or near London in 1579 and was educated in France and Spain. As a Jesuit priest, he taught at two French universities. Due to the politics of the day, he had to sneak back into England, as Catholics were not welcome there. He corresponded with Cecil Calvert, the second Lord Baltimore, who was looking for help to resettle Catholics to his colony, Maryland. White himself wanted to establish a mission to the Native Americans there. The priest chronicled the voyage on the Ark and the first steps in the New World in a book that has been an important source of early Maryland History, Voyage Into Maryland.

After a four-month trip, in which a frightening storm blew the Ark off course, the seafarers finally landed in Barbados, then Virginia and finally, on March 25, 1664, on St. Clement’s Island, near the mouth of the St. Mary’s River in Maryland. In thanksgiving for their safe arrival, Fr. White offered Mass. The expedition made a treaty with the Yaocomico natives for land at the mouth of the Chesapeake Bay, where the new arrivals built St. Mary’s City.

“Fr. White worked very hard to learn the Native American languages of the Piscataway Indian people from Southern Maryland,” according to the website Exploring Maryland’s Roots. “He wrote down a dictionary of Indian words. He translated Catholic prayers into the Indian language. In 1639, Fr. White met the tayac, or head chieftain, of the Piscataway Indians. The tayac’s name was Kittamaquund.” Kittamaquund professed his faith, and White baptized him and his family.

According to the Catholic Encyclopedia, White “carried the Gospel to the Anacostans in the neighborhood of the nation’s capital.”

But the rise of the Puritan party in England had “disastrous effects” on Catholic interests in Maryland,” the encyclopedia says. A “band of marauders from Virginia plundered the Jesuit establishments, and Fr. White, with two companions, was seized and sent in irons to London, where he was tried on the charge of treason, as being a priest in England contrary to [law].” Beginning in 1645, White spent three years in an English jail, but then a court acquitted him. He never did make it back to Maryland, dying in England in December 1656, but his legacy in the New World lives on.