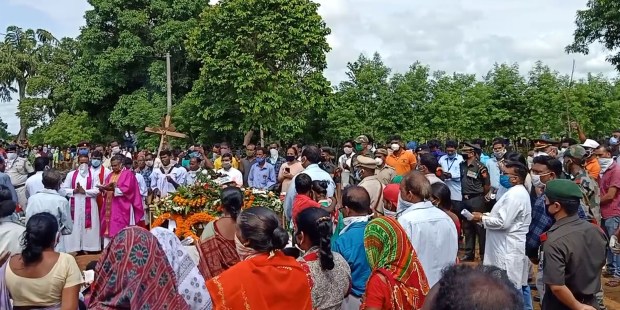 The funeral for Chandrakant Pradhan, a 28-year old Catholic who was among Indian soldiers killed in the clash with Chinese soldiers, was attended by hundreds in Kandhamal, India.

Kandhamal in eastern Odisha state became a familiar name across the world in 2008, following the orchestrated violence against Christians in which nearly one hundred valiant Christians embraced martyrdom.

While none of these martyrs received even a proper funeral during the violence that engulfed the remote jungle region, the Our Lady of Charity Church at Raikia in Kandhamal on June 19 witnessed an unprecedented funeral for a “martyr.”

Hundreds attended the funeral of Chandrakant Pradhan, a 28-year old Catholic who was among Indian soldiers killed in the clash with Chinese soldiers in the Ladakh mountains of the Himalayas.

“Kandhamal never had a funeral like this,” Fr. Prabodh Pradhan, former parish priest and distant cousin of the “martyred” soldier, told Aleteia after the funeral he presided over.

“The reaction of hundreds who attended (the funeral) was very moving. The military salute inside the cemetery reminded us of his political martyrdom,” he said.

“Chandrakant was a strong Catholic and active in the Church. He took my blessings before joining the army in 2014 when I was the parish priest. His strong faith was evident in the cross he wore (see in his recent photo) even when he was a soldier,” recounted Fr. Prabodh.

In fact, a special spot was accorded to bury the “martyr” soldier inside the cemetery of the Raikia church, known as the cathedral of Kandhamal, which is home for three quarters of the 80,000 Catholics in the Cuttack-Bhubaneswar Archdiocese.

Chandrakant’s body was brought to Raikia in Kandhamal, 160 miles from Odisha’s capital Bhubanesar, in the early morning. After being taken to his house at Biorpanga village, the body was brought to the church in two hours. Unmarried, Chandrakant was the eldest of Karunakar Pradhan’s four children, including a daughter.

“Though we cannot call him a martyr in Christian sense, the funeral reminded us of the many martyrs of Kandhamal, who missed even a formal funeral,” pointed out Fr. Nayak who has been documenting the cases of each of the martyrs for presentation to the Vatican.

Following the mysterious murder of Hindu leader Swami Laxmanananda Saraswati in August 2008 in Kandhamal, Hindu nationalists promptly touted the murder as a Christian conspiracy and called for revenge on Christians.

Dozens of valiant Christians refused to recant their faith even under death threat, and embraced martyrdom. In the aftermath, nearly 100 Christians were killed, and 300 churches and 6,000 houses were plundered in unabated violence, rendering 56,000 homeless.

The shocking killing of the 20 Indian soldiers on June 15 in a clash with the Chinese army has led to an outpouring nationalist sentiment, with each of the slain soldiers being accorded solemn funerals across the country.

According to reports, the clash in the Galwan valley of Ladakh in the chilly Himalayas was without any firearms because of a 1996 agreement barring guns and explosives from the area. At least 76 Indian soldiers were injured though China has not released any information about casualties, though India said both sides suffered losses. The two nations have accused each other of crossing the poorly demarcated border and provoking the fight, the BBC reported.

At the time of the writing of this report, the entire Indian political leadership was in a virtual meeting in COVID times, with Prime Minister Narendra Modi and leaders of all major political parties discussing on Indian response to the Chinese brutal assault on Indian soldiers and its sovereignty.