The 10 swords you need to fight evil 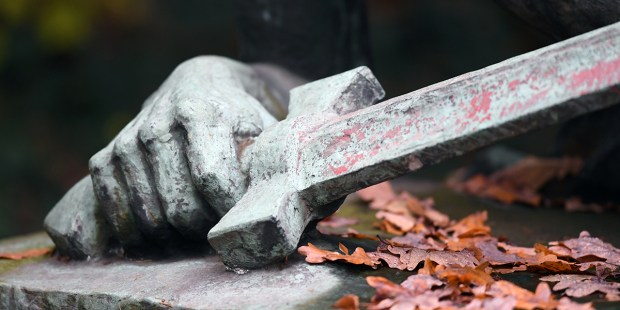 Let’s not kid ourselves. The battle is constant.

Some might ask, “Why would Jesus tell us to a buy a sword?”

I’m inclined to ask the latter because I recently read Immortal Combat: Confronting the Heart of Darkness, by Father Dwight Longenecker. (I wrote about the first half of the book at Aleteia last week: HERE; you can access audio and notes for my recent interview with him about the book HERE.)

Father Longenecker uses Greek mythology to outline a memorable account of how we can succumb to or be seduced by evil. In the latter portion of his book, he uses specifically biblical themes—depicted via the image of the sword—to show us how to fight back against evil, and secure hard-won ground. Both elements, namely, offense and defense, Father Longenecker makes clear, are essential for victory in the war against evil.

And let’s not kid ourselves. The battle is constant. Our spiritual enemy is eager to lull us into a false sense of security, so that we might slack off. Consequently St. Jerome warns: “Let us not lose by hollow peace what we have preserved by war.”

Invoking St. Therese of Lisieux (“Sanctity! It must be won at the point of a sword!”) who cried out on her deathbed, “I will die with my weapons in my hand!,” Father Longenecker lists 10 swords. Let’s review of each, and then consider how to have a place for all of them in our lives.

Sacraments: In each of them we have a share in the cross and resurrection of Christ. We’ll have no reliable spiritual power if we don’t live a sacramental life.

Sacred Scripture: We can’t progress in spiritual maturity if we don’t read the manual. It would be madness not to commit to mind and heart the very words that have sustained all of God’s saints.

Small (as in “Small is beautiful.”): Our only option, says Jesus, is to “become like little children.” (Matthew 18:3) Only those who know they’re small won’t rely on their own strength, but rather lean on God’s strength.

Secret: However public our devotion or apostolate might be, there must be time to withdraw, to allow God to work on us in hidden ways.

Sacrifice: The readiness to give ourselves and spend ourselves, up to and including laying down our lives, is a powerful antidote to Satan’s pride and narcissism.

Simplicity: Simplicity of speech keeps us from lying. Simplicity of life helps us to rightly value what is rightly valuable. Simplicity of person, Father Longencker says, enables us to have a proper sense of ourselves, not one given to pride. He quotes St. Francis de Sales: “Be who you are, and be that well.”

Steadfast: There is no substitute for good habits, developed carefully and patiently, over time. A clever man once quipped, “Nothing so generates false hopes like the first six hours of a diet.” So too in the spiritual life.

Supernatural: We can’t fight preternatural enemies, while fighting for eternal stakes, and rely only on natural abilities. Without recourse to the supernatural, we will lose.

Suffering: Father Longenecker identifies a perennial paradox, namely, that the Way of the Christian Warrior is also the Way of the Lamb. In Sirach 2:1 we read, “My son, if you would serve the Lord, prepare for trial.” Likewise, St. Ignatius Loyola wrote, “Nothing worthy of God can be done without earth being set in uproar and hell’s legions roused.” In following Christ, we will be opposed.

When I write next, I will speak of being on guard against deception. Until then, let’s keep each other in prayer.

Read more:
14 Quotes from Pope Francis on the devil