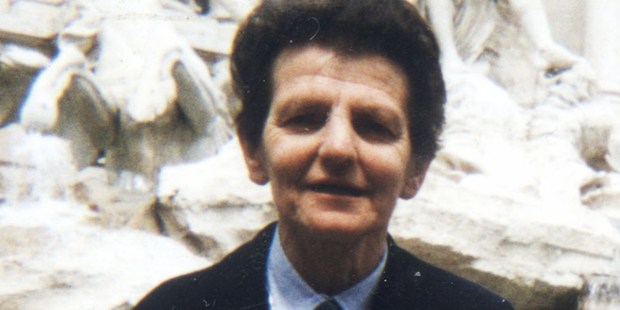 Her killers were three young women, who had become wrapped up in Satanism.

Her killers said she kept saying, “Lord, forgive them.”

Teresina Elsa Mainetti was born in Colico, Italy, on August 20, 1939. She felt the calling to dedicate her life to helping others from when she was in grade school. Staying true to herself, she entered the novitiate of the Sisters of the Cross, in Rome, Italy, on August 22, 1957. Teresina had just turned 18 years old. She took the name Sister Maria Laura.

Sister Maria studied hard and dedicated her life to children, young people, and families in the towns surrounding Vasto, Rome, and Parma. She moved to Chiavenna in 1984. Once there, she quickly became known for her love and commitment to the homeless youth and poor people of the area. Her ministry to children as a catechist and spiritual leader added to her reputation.

On the evening of June 3, 2000, Sister Maria Laura Mainetti was at home in her convent when she received a phone call from one of her former catechism students. Sister Maria was at that time the Mother Superior of the convent; the nuns specialized in helping teenagers in trouble.

The girl who was calling was asking Sister for help. She said she had been raped and was pregnant. Frightened and alone, she said, she was considering having an abortion. She asked Sister if she could meet with her to talk. Sister agreed, and the girl told her she would call her back with a time and place.

The girl called back three days later, on June 6, and told Sister Maria she had run away from home and would she please come to see her. She wanted to meet Sister in Marmitte dei Giganti Park at 10 p.m. Sister agreed. It was not unusual for her to go out at night like this as she was always available to assist young people in trouble.

The girl who met her was Milena De Giambattista. The two walked together over to the park where Milena’s two friends, Ambra Gianasso, and Veronica Pietrobelli, joined them. All four walked into the park and headed to a secluded area. When they arrived there, they immediately made Sister Maria kneel on the ground. They then began screaming and cursing at her and smacking her head. De Giambattista began beating Sister Maria with a brick while Gianasso started smashing sister’s head into a wall next to where they had stopped.

They had only just begun. Then they took turns stabbing Sister Maria with a kitchen knife. Their intention was to each stab Sister six times for a total of 18 stab wounds, which would be three sixes, or 666, the number of the beast. But they lost count and stabbed her 19 times, one too many, which “ruined” their ritual.

The next morning someone out for an early morning walk discovered Sister Maria’s brutalized body. In her hands were clumps of one of her attackers’ hair. As the police began their investigation, a witness stepped forward and said that he had seen the three girls and Sister Maria together on the night of June 6.

The police monitored the girls’ phones, and in one of the calls, two of the girls began discussing the murder. Three weeks after the crime had been committed, the three girls were arrested. Two of the girls were 17; the other was 16. None of them had any prior history of violent behavior or of being in any trouble. They all came from upstanding, middle-class families.

At first, they said that killing Sister was “a game.” They finally admitted it was a satanic sacrifice. After searches in the young peoples’ homes, the police were able to discover the existence of a satanic subculture. These three young women, all teenagers, had aligned themselves with Satan and his evil demonic forces. Their initial target was the parish priest, but they realized a priest was too powerful for them to bring down.

They then targeted little Sister Maria, the kind nun who had taught them catechism when they were in grade school. Sister was willing to do anything to help her former pupil, believing the story she was told.

In 2008, Pope Benedict XVI praised Sister Maria, saying that “with total giving of self, [she] sacrificed her life while praying for those who were attacking her.”

The killers of Sister Maria admitted that she was praying for them as she lay dying. They all said she kept saying, “Lord, forgive them.”

Pope Francis declared on June 21 that Sister Maria Laura Mainetti had died “in odium fidei” (in hatred of the faith) and was a martyr. She will be beatified at a date to be announced.

The murderers of Sister Maria were juveniles and served their sentences, being paroled (on the average) after about five years. Today they are all living lives far away from their crime.

Read more:
Satanic priest turned saint, Bartolo Longo is proof that no one is too lost to be found

Read more:
Satan pays badly, warns pope, calling us to find the ‘Little Judas’ we have within