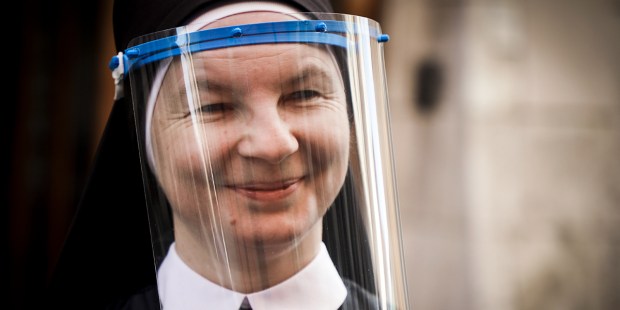 Healthcare, children, and trafficking are frontline areas women religious have worked in.

This past spring, Pope Francis hailed those who were directly responding to the COVID-19 pandemic, calling them “the saints next door.”

“I’m thinking at this time of the saints who live next door,” the pope said in an interview. “They are heroes: doctors, volunteers, religious sisters, priests, shop workers — all performing their duty so that society can continue functioning. How many doctors and nurses have died! How many religious sisters have died! All serving …”

Health care workers were recognized widely by scheduled rounds of applause from apartment windows in places like Paris and New York.

Now, the religious sisters that Pope Francis mentioned have also received their recognition. On Tuesday, the embassies of the United States and Great Britain at the Vatican honored the sacrifice of women religious during the coronavirus pandemic.

“Religious women on the front line,” a symposium held online, was organized by U.S. Ambassador Callista Gingrich and her British counterpart Sally Axworthy.

Three sisters shared their experiences of caring for the disabled and elderly and combating sexual abuse while also dealing with the coronavirus. By giving them the floor, the diplomats wanted to “honor the memory” of nuns who gave their lives during the pandemic and testify to their “sacrifice” to care for the weakest, Gingrich said.

Some of those “weakest” are the newborn babies with disabilities in Ghana, cared for by Sister Therese Mario Mumuni. Local beliefs in her area put the lives of disabled children in jeopardy because physical and mental disabilities are considered a bad omen, so she founded the Marian Sisters for Eucharistic Love to care for them.

Sister Therese faced two unexpected challenges from the coronavirus. The local school for disabled children had to shut down, so she had to take them in — and feed them. And parents who could not work began to be tempted to sell the kids to traffickers.

Sister Imelda Poole corroborated Sister Therese’s remarks, saying that trafficking, already affecting some 40 million victims worldwide, got a boost from the economic meltdown brought on by the pandemic. As the founding nun of Mary Ward Loreto, an association fighting trafficking, Sister Imelda collaborates with the Religious Network in Europe Against Trafficking and Exploitation, advocating for stronger legislation.

The crisis places thousands of young people, particularly young women, at risk of being trafficked, “because these are the people — the vulnerable — that the traffickers go after,” she said.

In addition, so many more children are at home during the quarantines and lockdowns, and thus exposed much more to the many dangers on the internet, she said.

Meanwhile, Sister Alicia Vacas, a nurse and the Jerusalem-based Middle East provincial superior of the Comboni Sisters, found herself back with her community in Bergamo, the epicenter of the pandemic in Italy. Of the 60 nuns in this community, 45 were sick and 10 died. Most of the staff was infected as well, so the house was in “chaos,” without anyone to nurse the sick, cook, clean or do laundry, she said.

The younger nuns dedicated themselves to the care of the older ones. They managed to cope with the crisis, thanks to other congregations around the world, who sent them the personal protective equipment they didn’t have.

Her experience coincided with Lent and Holy Week, bringing the “cross, Passion and resurrection” to life for her.

Axworthy said that one of the discoveries she has made as British ambassador to the Holy See “was to realize the immense work done by religious congregations” around the world. Religious sisters “are resilient, staying in conflict zones, for example, even when that is a risk for themselves,” she said. “We recognize that they are uniquely well placed to build relationships of trust with those who have been exploited or abused.”

But women religious working “on the front lines” are not “super women,” said Sister Alicia. They are “resilient mothers; they really believe that life is stronger than death.”