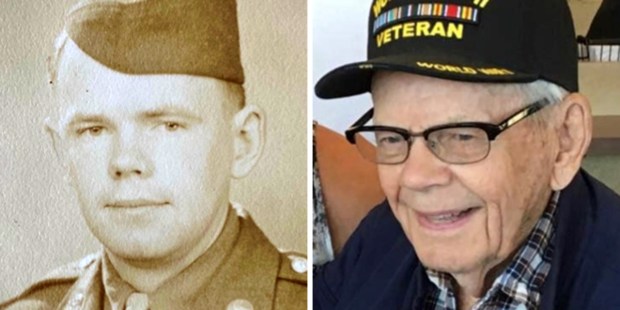 Just shy of his 100th birthday, Mickey Nelson has donned his walking shoes to help others.

One thing the pandemic has really highlighted is how centenarians are an impressive group of people. Not only have they managed to live to such a great age, but they’re not content with kicking off their shoes and relaxing. Instead they want to help others.

In the UK there was the now-100-year-old Captain Tom Moore, who raised a staggering $45 million dollars for the British health service by walking 100 laps of his garden with his walker in hand. He was rewarded with a knighthood for his efforts and is now a “Sir.”

Now a 99-year-old WWII veteran from Minnesota, who is just shy of his triple-digits birthday, has set himself the impressive target of walking 100 miles by the end of the summer to raise money to help the Salvation Army’s campaign for those impacted by COVID-19.

Mickey Nelson has been walking away in his hometown of Clarks Grove in his native Minnesota. He explained to Star Tribune that “I know that people are struggling, either from the illness or a job loss from all the businesses shutting down. I just thought there was something I could do to help.”

In the town of 700, Nelson still lives in the house where he was born nearly a century ago. He’s lived through many significant world events, sharing on his fundraising page how his family managed to survive the Great Depression through their frugality and opportunities to feed themselves by hunting and fishing. He recognizes this is not the case for everybody today and people are going hungry, and he states: “This is heartbreaking to think about in a great country like ours.”

He shared that his “Walking to 100” mission was inspired by his British peer, Captain Tom, and the much-loved Hollywood character, Forrest Gump. Nelson explained how the line in Gump, “I just kept on running,” give him “a little kick.”

Nelson has already raised $95,000. Lt. Colonel Lonneal Richardson, commander of the Salvation Army Northern Division explained. “This effort being made by Mickey is truly selfless, and we are grateful for and inspired by his efforts.”

It’s incredible to think of how, at a time in life when people would generally slow down having already given so much, men like Nelson and Captain Tom are still trying to find ways to help others.