Is the Vatican its own country? 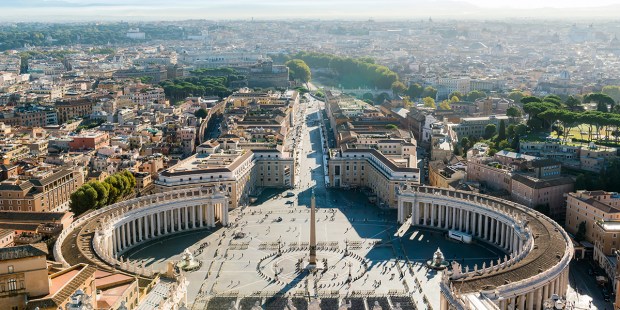 Vatican City is the smallest independent country in the world, covering roughly 100 acres and surrounded by the city of Rome.

The Catholic Church has had a tumultuous relationship with Roman government over the centuries. After initially being the subject of fierce persecution, for many years it was a powerhouse and had great political influence in Italy and Europe.

Then in the 19th century tensions began to rise again and by 1870 Rome fell and Pope Pius IX became a “prisoner” in the Vatican, no longer having any temporal land. Thus began many years of political turmoil in Rome, with the pope essentially under self-imposed “house arrest.”

Over the years the pope had his residences at St. John Lateran, the Quirinal Palace and the Vatican, but when the pope retreated, he was forced to find asylum in the Vatican.

Initially the Law of Guarantees was made in 1871 where, according to the Catholic Encyclopedia, “all residences of the pope on Italian soil should enjoy immunity and should be extraterritorial. It follows that the Vatican Palace must be immune and extraterritorial in the eyes of the Italian authorities. Consequently, all action of the Italian authorities must stop at the gates of the Vatican; the inhabitants of the palace cannot be taxed, subpoenaed, or summoned to defend themselves.”

It wasn’t until February 11, 1929, that the Vatican became its own independent country. This was ratified by the Lateran Treaty, signed by Italy and the Holy See, where it states the following:

Italy recognizes to the Holy See full ownership and exclusive and absolute sovereign power and jurisdiction over the Vatican, as it is currently constituted, with all its appurtenances and endowments, thereby creating Vatican City for special purposes and with the methods set out in this Treaty.

Ever since the Vatican has been independent and operates much like other countries, though on an extremely smaller scale.

Read more:
Here are 10 official titles of Pope Francis and their meaning