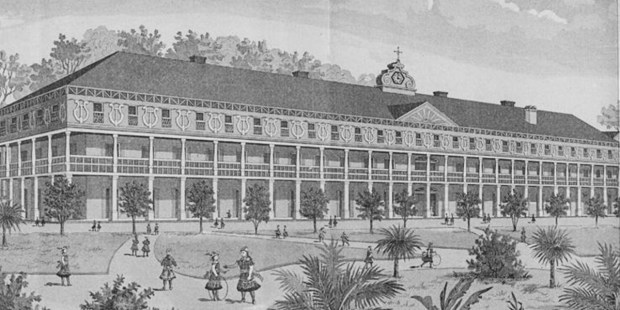 Founded in 1727, Ursuline Academy is also the oldest school for girls in the United States.

Ursuline Academy, in New Orleans, Louisiana, enjoys the distinction of being the oldest continuously operating Catholic high school in the United States. It’s also the country’s oldest school for girls.

According to an account of the history of the school in Country Roads Magazine, the school for girls came to be because the town of New Orleans needed a hospital to serve its French settlers.

In 1726, five years after New Orleans’ colonial administrator Jacques de la Chaise’s sought out “four good gray sisters to come and settle here and take care of the sick …,” King Louis XV decreed that three Ursuline Nuns from Rouen should travel to New Orleans to establish a hospital for the poor.

The king also tasked the sisters with doing establishing something the town didn’t ask for:  a school for girls, which was the particular mission of the order and its founder, St. Angela Merici, in Brescia, Italy.

Thus in 1727, 12 Ursuline nuns from France established the first boarding school in the state of Louisiana. At its start it served the daughters of wealthy families from Central and South American countries. As Anne Craven reports in Country Roads, in addition to serving their paying students, the school took in orphans and Native American and Black girls who came for catechism classes during the day.

The sisters had a most civilizing effect on the town of New Orleans, which when they arrived was known for its vices more than its virtues.

“In the end, the devil has a great empire here, but this does not take away from us the hope of destroying him, with God’s love …  not only do debauchery, bad faith and all the other vices reign here more than in any other place, but they do so in abundance.”

Within a few years, New Orleans became known for its higher than average levels of literacy and property ownership, according to Craven.

In her book Masterless Mistresses, which Craven quotes, Tulane professor Emily Clark credits the Ursuline nuns with improving life for both the wealthy, and the poor, and for both Black and white girls.

“By the end of the colonial era they had facilitated the creation of a large Afro-Catholic community and an integrated congregation,” she writes.

Over 200 years later the school continues to serve girls and young women from New Orleans. Located on 11.5 acres in Uptown New Orleans, Ursuline has a student body of 620 girls, from pre-kindergarten through high school. Following in the tradition of the founder of the Ursuline order, and the sisters who established the New Orleans school, the school strives to provide “a nurturing environment for the learning and development of the whole person.”

According to the school’s mission statement, Ursuline Academy continues to be “dedicated to the moral, spiritual, intellectual and social growth of each individual, and these values are validated by our educational approach.”