In the Democratic Republic of the Congo, women religious fight the pandemic 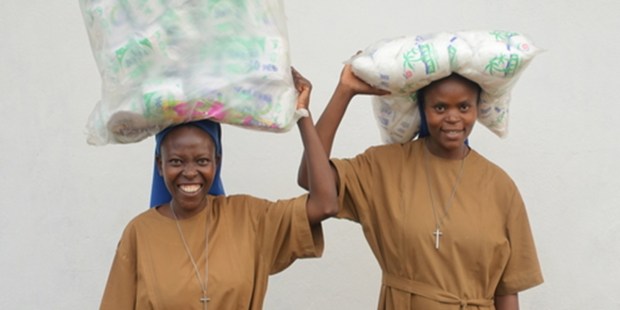 Even in normal circumstances, the situation there is extremely difficult.

A loss of wages that were meager to begin with. No further material or financial support from parishioners. Abject poverty. The coronavirus pandemic and the lockdown in the Democratic Republic of the Congo (DR Congo) have had a severe impact on the Church. To mitigate the hardship, Aid to the Church in Need (ACN) has granted emergency subsistence aid to almost 70 communities of women religious in Bukavu, an ecclesiastical province in the eastern part of the country.

As of June 22, 2020, there were 5,826 confirmed cases of COVID-19 and 130 deaths in DR Congo. With the arrival of the pandemic, the life of the sisters in Bukavu became a nightmare. Even in normal circumstances, the situation there is extremely difficult. In a region rife with ethnic conflicts, armed incursions by neighboring countries, kidnappings and rape, the sisters eke out a living by teaching catechism and working in schools and health centers. However, measures imposed to protect against the coronavirus have cut them off from their supplies, making their situation extremely precarious.

Wages stopped being paid when a state of emergency was proclaimed on March 24. Plus, medical workers, including many sisters, are compensated according to the number of patients they treat. However, out of fear that they will become infected, people are reluctant to go to the hospitals for care. For sisters this has meant a drastic drop in income or even a complete loss of income. Those religious who work in the schools depend upon the contributions towards their living expenses they normally receive from the parents. With schools closed because of the pandemic, these contributions are no longer forthcoming.

To ensure the survival of the sisters, and answering a plea by Archbishop François-Xavier Maroy of Bukavu ACN has approved aid for 69 communities of sisters from six different congregations serving in the six dioceses of the ecclesiastical province of Bukavu. The grant of $135,000 will benefit 464 women religious.

“It is our duty to give them comfort in the face of these privations, a comfort that they will cause to multiply many times over to benefit those who have even less than they themselves,” said Christine du Coudray, who oversees ACN projects in DR Congo. She added: “While all of the non-governmental organizations have fled because of the ongoing conflict, the Church and in particular the sisters are still there, close to the most severely disadvantaged groups, like good souls, unrecognized but fully in the spirit of Mother Teresa!”

“This conflict has been smoldering for 20 years; how often have I visited them after yet another attack by rival gangs, after they became victims of rape and massacres that spared no one, after they survived earthquakes, landslides or awe-inspiring floods, as has just happened in Uvira [about 60 miles south of Bukavu]—catastrophes that obliterate everything in their wake and cut a wide swath of destruction.”

This aid is part of ACN’s ongoing response to the global pandemic. Early on, the organization approved Mass stipends for priests serving in various dioceses across the country. These priests are also dealing with severe financial difficulties. Without Sunday collections or the other sources of income that are no longer available to them because of the suspension of pastoral and community work, many priests can neither earn a living on their own nor carry out their pastoral work.

“In normal times, the faithful support the priests with food and other donations,” said Bishop Bernard-Emmanuel Kasanda, who heads the Diocese of Mbuji-Mayi, in the middle of the country; “now that their sheep all have to stay at home because of the lockdown, all of a sudden everyone’s life is much more difficult than it was before because the majority of the people are affected by the very high unemployment rate [almost 96 percent].” In the beginning of the crisis, ACN had already donated Mass stipends to support the 289 priests and women religious in the diocese.

A large number of Mass stipends have also benefited 25 priests of the Congregation of the Missionaries of Workers. The stipends truly are “relief,” wrote one of the beneficiaries, Father Alain Mwila Wa Ilunga, who shares the financial aid “with the poorest of the poor and the destitute sick so that they may have daily bread to eat.”

The novice master of the order, Father Clément Mwehu Muteba said he will use it buy gas, so that he can continue to carry out his apostolate at the chapel he has been assigned. Thanks to the Mass stipends, he can also “buy some sheets of paper, which are necessary to teach the young people” he works with in Lubumbashi in the province of Upper Katanga.

Further beneficiaries of the Mass stipends are 40 priests in the Diocese of Kilwa-Kasenga, in the eastern part of the country. The stipends “secure our livelihood and safeguard the lives of thousands of believers who, through our humble efforts, hear the Holy Word of God and can receive the sacraments,” said Father André Mpundu, vicar in the parish of the Blessed Anuarita in Kasenga.

He reported on the gratitude of an 80-year-old former sacristan. She told Father Mpundu: “A nurse regularly comes to visit me to treat my rheumatism, but when you visit me, Father, you come with Christ, so that I may receive Holy Communion, then my joy is vast and boundless.”

“We often hear these and similar sentiments,” said Father Mpundu, who, thanks to the Mass stipends, continues to visit the sick, the elderly and those who are lonely. He concluded: “This is very encouraging for my service as a priest.”

This article was first published by Aid to the Church in Need. To learn more about ACN and help them in their mission to serve persecuted Christians, visit www.churchinneed.org