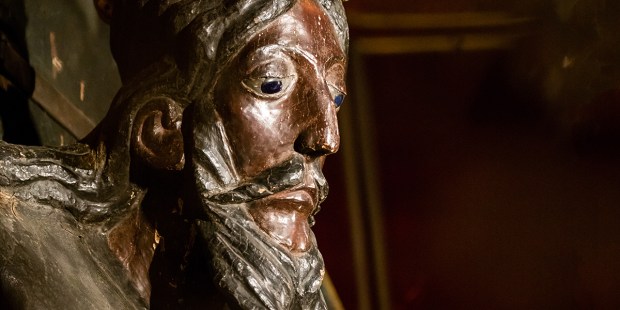 The results support the icon’s origins as recounted in medieval legend.

A recent study of the Volto Santo di Lucca (The Holy Face of Lucca) has confirmed that it is not a replica, but the original artwork that has survived over 1,000 years. The analysis was conducted using Carbon-14 dating of samples of the wood and a canvas that has been attached to the piece since it was brought to Italy in the 8th century.

Lonely Planet reports that it has long been believed that the crucifix, which is housed in the Cathedral of San Martino, was merely a copy of the original piece. Although it was thought to be a facsimile, it has been a focal point of Christian worship in the Tuscany region for centuries, drawing pilgrims and faithful from around the world.

The testing confirmed that the icon arrived in Italy in 782, and it is now considered the oldest surviving wooden sculpture in the Western world.

According to the legend, the sculpture was carved by Nicodemus, who is said to have aided St. Joseph of Arimathea in Christ’s burial. The medieval tale holds that Nicodemus carved everything but the face of the crucifix before falling asleep. When he woke up, however, he found that the face of the statue had been completed by an angel.

The legend goes on to suggest it was discovered in a cave in the Holy Land by a bishop who was guided to it in a dream. The icon was then transported to Italy on a boat with no sails or crew, and it would retreat from all who approached it until the bishop of Lucca, also guided by a dream, brought a large crowd of faithful to the port. Once the crowd was there, as the legend tells, the ship approached the port on its own accord.

The New York Times notes that the recent testing was commissioned in honor of the 950th anniversary of the foundation of the Cathedral of San Martino. The work was conducted by Annamaria Giusti, one of Italy’s best-known art restorers, who called the Volto Santo, “one of the true icons of Christ,” comparing it to the Shroud of Turin.

Giusti went on to suggest that the survival of a perishable wooden sculpture for upwards of 1,200 years is in its own right significant:

“The miraculous thing is that it’s managed to survive to our days,” said Ms. Giusti.