The missionaries who lift up Hinduism’s “Untouchables” 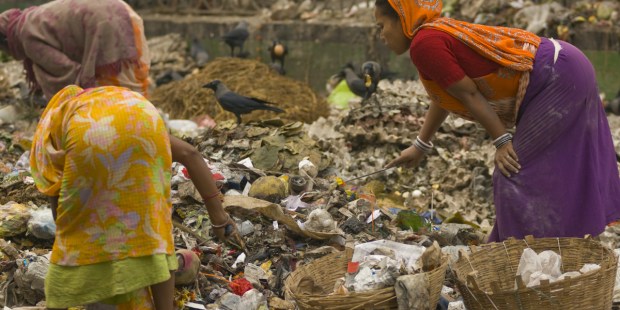 Dalits, who are so despised that they exist outside the caste system, hail Catholic priest as “our guru.”

The ancient Hindu caste system locks people into a social stratum and occupation determined by the family into which they are born.

As the BBC explains, the top caste is the Brahmins, who are mainly teachers and intellectuals. Then come the Kshatriyas, or the warriors and rulers. The third caste is the Vaishyas, or traders, and the bottom are the Shudras, who do all the menial jobs.

Then there are the Dalits, who are so “low” that they are outside the caste system. In fact, they are called Outcastes and are also known as Untouchables. They do the dirtiest jobs — cleaning sewers, taking away dead animals, or tanning leather. An estimated 200 million people in India and 3.5 million in Bangladesh are Dalits.

Although the system applies only to Hindus, a Catholic religious order in Bangladesh has taken a great interest in reform meant to lift Dalits up from their misery. Fr. Luigi Paggi and Fr. Antonio Germano, members of the Society of St. Francis Xavier for Foreign Missions (Xavierians), pioneered social changes through education, jobs, and unionizing, according to the Union of Catholic Asian News (UCA News).

UCA News explained that the plight of Dalits came to the attention of the Xavierians in 1952, when the Khulna Diocese was formed. They focused on education and conversion, though some missionaries preferred to concentrate on social reformation to bring sustainable changes for the community. Today, three Catholic parishes — Shimulia, Satkhira and Borodol — are composed entirely of Dalits, accounting for half of Catholics in Khulna Diocese, the news outlet said.

“Instead of prioritizing conversion, I started universal education and a campaign for breaking the wall of social divide that entrapped the community for ages,” Fr. Paggi, 72, told UCA News. “I have tried to bring to their sense that it is their country too. They must demand for their rights, and if needed they must wage movements. … All we wanted was to ensure their food, housing, livelihood, education and empowerment, and religion comes much later.”

“The missionaries have offered us education and encouraged us to raise our voice against discrimination and injustice and demand our constitutional rights as citizens of the country. They are truly our saviors,” said Milon Das, an activist working on behalf of Dalits in Bangladesh.

Das (the surname is common among Dalits and refers to the traditional Outcaste role of servant) traces his activism to a humiliating experience in his youth. In 1988, his father took the then-13-year-old to a local barbershop for a haircut, but they were denied service because of their low social standing.

Diplay Das, 43, head of the Dalit Empowerment Foundation, a rights and empowerment group for Dalit women and girls, credits the priests for uplifting the community.

“For hundreds of years our ancestors have lived and died inhumanely. God created all human beings as equals but society put them into the lowest rung and didn’t even consider them as human beings,” Diplay Das, a Hindu mother, told UCA News.

Shudhangshu Martin Das, 40, a Catholic, believes Dalits would be still in the dark if the missionaries were not there for them, UCA News said.

“Dalits have lived like animals and as untouchables, but they have given us hope and courage to overcome obstacles. Today, many Dalits like me are educated, able to eat and live with dignity thanks to great missionaries,” he told the outlet.

Said Shudhangshu Martin Das, “The missionaries have literally put us in flower vases from the dirty drains.”