Baby born at 23 weeks is defying the odds 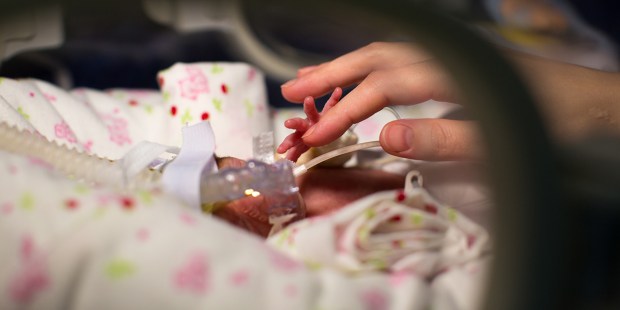 On March 26 tiny Oliver-Cash Lowther-Ryan was born after just 23 weeks in Kent, England during the coronavirus pandemic.  He weighed a little more than one pound, and had only a 3% chance of survival because of life threatening issues.
“Whilst I was in labour a doctor told me that he only had a three percent chance of survival,” said his mother Frances, reported The Mirror.
Oliver seemed to be doing fine at first, but two weeks later his condition deteriorated rapidly, with bowel problems, bleeds on the brain and lungs, collapsed lungs, and heart problems.
One of the hardest things for Ethan and father Frances was not being able to hold their son for the first nine weeks.
“It was so, so difficult not being able to hold him but the moment I was allowed was the most incredible moment of my life. Words can’t really describe it. It was just amazing to be able to touch and hold after so long,” Frances said. “The emotions I felt were so overwhelming. I felt like crying but I was also completely overjoyed.”
Because of the coronavirus restrictions, his parents couldn’t visit him together, so they took turns.
“I bought a new shirt so that I could easily put him on my chest to do skin to skin and it was an emotional moment. … the wave of love for him I felt at that moment was amazing,” he said.
Oliver still is in St. Thomas’ Hospital in London, but with his condition improving rapidly, he may be well enough to go home in July, according to The Christian Institute.
“He is an amazing fighter and he’s got the nickname of Rocky because he won’t stay down,” his father said. “We’re so proud of him to have come through all the challenges he has faced so far.”
The youngest recorded premature baby is Jemarius Jachin Harbor Jr. The Georgia infant was born at 21 weeks, zero days gestation in December – beating the previous record-holder by four days.
Recent studies in the New England Journal of Medicine have found that more premature infants are surviving at 22 of pregnancy.
Meanwhile, abortions are still legal for any reason up to 24 weeks in England as well as many U.S. states.