This famous sculpture depicts the ecstasy of St. Teresa of Avila 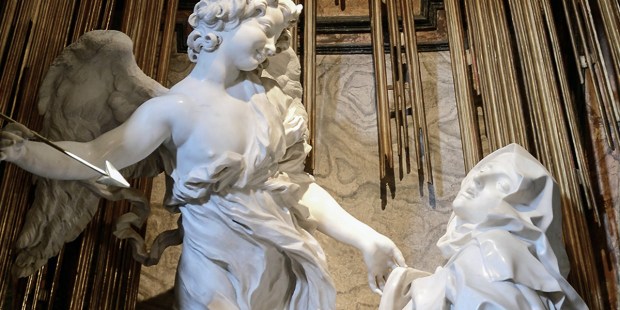 The life-sized marble sculpture of the “Ecstasy of St. Teresa” by Gian Lorenzo Bernini is considered a masterpiece of Baroque art.

Click here to launch the slideshow
Teresa of Ávila, a Spanish mystic who founded the Discalced Carmelites order, is considered one of the most important female Catholic saints in history. The Spanish noblewoman turned ascetic nun left a profound mark on this world thanks to her written contributions, from The Way of Perfection to The Interior Castle and The Life of Teresa of Jesus, which are today considered keystones of Spanish Renaissance literature in addition to their significance as works of Catholic spiritual literature.

One of her most famous passages describes her experience of religious ecstasy: “I saw in his [an angel’s] hand a long spear of gold, and at the iron’s point there seemed to be a little fire. He appeared to me to be thrusting it at times into my heart, and to pierce my very entrails; when he drew it out, he seemed to draw them out also, and to leave me all on fire with a great love of God. The pain was so great, that it made me moan; and yet so surpassing was the sweetness of this excessive pain, that I could not wish to be rid of it. The soul is satisfied now with nothing less than God. The pain is not bodily, but spiritual; though the body has its share in it. It is a caressing of love so sweet which now takes place between the soul and God, that I pray God of His goodness to make him experience it who may think that I am lying.”

Italian Baroque sculptor Gian Lorenzo Bernini captured this moment of ecstasy in what is considered to be one of the sculptural masterpieces of the Baroque period. The sculpture, painstakingly carved from Carrara marble, depicted the 16th-century saint being stabbed in the heart by an angel holding an arrow.

Located in the Coronaro Chapel inside the Baroque church of Santa Maria della Vittoria in Rome, the life-size marble sculpture was completed under Pope Innocent X between 1647–1652.

Colored marble columns on each side of the sculpture and rays of light above it frame the scene in a theatrical way. The effect is further reinforced by light shining on the sculpture from a window hidden in the dome of the surrounding edicule. On the side of the sculpture, two niches hold sculptures of the Coronaro family, a Catholic family who donated money for the chapel, who look as if they are watching the theatre-like scene unfold.

This arrangement allowed Bernini to achieve what art historian Rudolf Wittkower called the “separation of two worlds”: on one hand, the material world of the spectators, on the other, the mystical experience of religious ecstasy of St. Teresa.

Make sure to visit the slideshow below to discover seven of Teresa de Avila’s insightful phrases on love, prayer, and friendship.