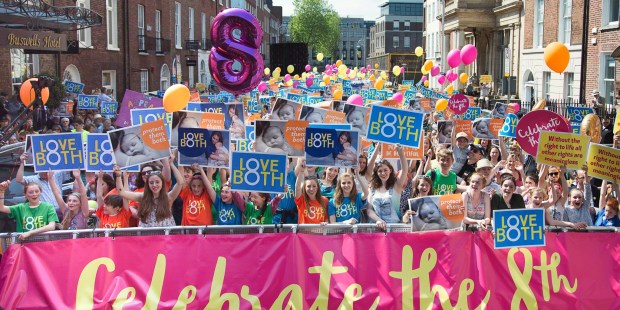 “It’s the first time in 18 years that there has been an increase in the number of abortions and the first time in our history that thousands of innocent unborn babies have had their lives ended with the full backing of Irish law,” said Maeve O’Hanlon of the Pro Life Campaign.

In its first year of legal abortions in the Republic of Ireland, 6,666 abortions were reported to the government agency responsible for keeping track of them.

In its first annual report to be published since the grounds on which termination of pregnancy is lawfully permitted were expanded in Ireland, following the result of the May 2018 referendum on the Eighth Amendment of the Constitution, the Department of Health reported the following numbers of abortions:

On May 25, 2018, a referendum on the Thirty-sixth Amendment of the Constitution yielded a 66.4% vote in favor or repeal. Following the amendment to the Constitution, Article 40.3.3 now reads: “Provision may be made by law for the regulation of termination of pregnancy.”

The Health (Regulation of Termination of Pregnancy) Act 2018 (“the Act of 2018”) was passed by the Houses of the Oireachtas on December 13, 2018, and signed into law by the President on December 20, 2018. The new Act repealed the Protection of Life During Pregnancy Act 2013 and the Regulation of Information (Services Outside the State for Termination of Pregnancies) Act 1995.

“The main purpose of the Act of 2018 is to set out the law governing access to termination of pregnancy in Ireland,” the report explained. “It permits termination to be carried out in cases where there is a risk to the life, or of serious harm to the health, of the pregnant woman, including in an emergency; where there is a condition present which is likely to lead to the death of the fetus either before or within 28 days of birth; and without restriction up to 12 weeks of pregnancy.”

The expanded allowance for abortion was introduced on January 1, 2019.

Liam Gibson, Political Officer for the U.K.-based Society for the Protection of Unborn Children (SPUC), commented on what he called “truly shocking statistics.”

“It would be easy to be overwhelmed by the sheer numbers of abortions or to be horrified by what the killing of children on this scale tells us about Irish society. However, we must never lose sight of the fact that each one of these 6666 abortions was a deliberate act of lethal violence directed at an entirely innocent and unique human being.

“No government, no state, regardless of a referendum can abrogate the God-given right to life of even one member of the human family,” Gibson continued. “The pro-life people of Ireland have fought a long, hard battle to protect women and children from abortion. It is very important that they do not remain silent in the face of this terrible injustice.”

Maeve O’Hanlon, spokesperson for the Pro Life Campaign, pointed out that the numbers should be higher.

“When you add today’s figure of 6,666 abortions to the 375 abortions on women from Ireland who traveled to England in the same period, the figure amounts to 7,041 in total,” O’Hanlon told Catholic News Agency. “This compares with a figure of 2,879 for the full year of 2018.”

“It’s the first time in 18 years that there has been an increase in the number of abortions and the first time in our history that thousands of innocent unborn babies have had their lives ended with the full backing of Irish law,” she told CNA. “Sure, we can avert our eyes from the truth of what is now legally sanctioned by continuing to dress it up with words like ‘choice,’ but that won’t change in any way the profound injustice of what the new law permits.”