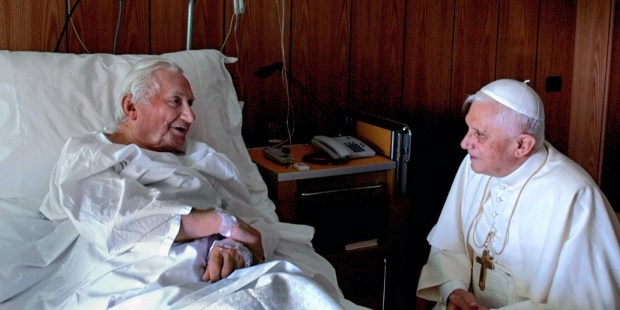 Francis notes Benedict XVI’s consideration in informing him of the news first.

Pope Francis sent a note to his predecessor, assuring him of his prayer that Benedict XVI would have the “support of Christian hope and tender divine consolation” as he mourns the death of his older brother, Monsignor Georg Ratzinger, who died July 1.

The Holy Father noted that Benedict was the first to transmit the news to him. And he promised his prayers for the soul of Georg, “so that the Lord of life, in His merciful goodness, may introduce him in the heavenly homeland and grant him the prize prepared for the faithful servants of the Gospel.”

Benedict XVI last week took his first trip away from the Vatican since his resignation to visit Georg, who was 96. The brothers were ordained together on July 29, 1951, meaning that Georg celebrated his 69th anniversary as a priest just before passing.

Monsignor Ratzinger will be buried July 8, following Mass celebrated by Bishop Rudolf Voderholzer. Benedict XVI is not expected to attend.

The famous boys’ choir that Monsignor Ratzinger directed for several decades, the Regensburg Domspatzen (the Cathedral Sparrows), will sing for a vigil on Sunday that will be streamed on social networks.

Read more:
Brother of Benedict XVI passes away in Regensburg at age 96

You had the sensitivity to be the first to inform me of the news of the death of your beloved brother, Monsignor Georg. I wish to renew my deepest sympathy and spiritual closeness to you in this moment of sorrow.

I assure you of my prayers of suffrage for the late and lamented, that the Lord of life, in His merciful goodness, may welcome him into heaven and grant him the reward prepared for faithful servants of the Gospel.

I pray also for you, Your Holiness, invoking the Father, through the intercession of the Blessed Virgin Mary, for the support of Christian hope and tender divine consolation.

Always united in faith in the Risen Christ, the source of hope and peace,