What is the magisterium of the Catholic Church? 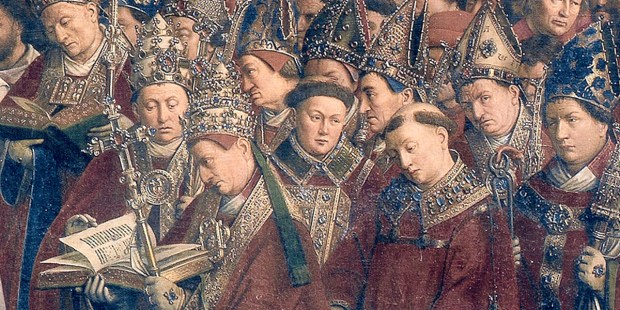 The magisterium is the official teaching office of the Church, including the pope and the bishops in union with him.

At times Catholics will talk about the “magisterium” and its role in the Church. What is it and what does it do?

In simple terms, the magisterium is the official teaching office — in the sense of role or authority, not a bureaucratic center — of the Church, which consists of the pope and the bishops in union with him. They are given the task of interpreting scripture and making judgments on “tradition” within the Church, making official statements as to the authenticity of such traditions.

Read more:
What is a dogma?

Here is how the Catechism of the Catholic Church defines the magisterium.

“The task of giving an authentic interpretation of the Word of God, whether in its written form or in the form of Tradition, has been entrusted to the living teaching office of the Church alone. Its authority in this matter is exercised in the name of Jesus Christ.” This means that the task of interpretation has been entrusted to the bishops in communion with the successor of Peter, the Bishop of Rome. (CCC 85)

This task, given to the apostles and St. Peter by Jesus Christ, can be seen in the New Testament, specifically in the Acts of the Apostles where there arose a dispute concerning the admittance of gentiles.

St. Peter had a vision where he was urged by God to accept the “unclean.” Afterwards he proclaimed, “‘Can anyone withhold the water for baptizing these people, who have received the holy Spirit even as we have?’ He ordered them to be baptized in the name of Jesus Christ” (Acts 10:47-48).

The baptism of the gentiles is one example of how Peter and the apostles encountered a new situation, where they had to discern the right course of action. Inspired by the Holy Spirit, they were able to make a proclamation that interpreted God’s word in an authentic way.

Catholics believe that the pope and the bishops in union with him can be trusted because of Jesus’ promise to send the Holy Spirit upon them, guiding them in the process of proclaiming certain “dogmas” and in judging the authenticity of certain traditions.

The entire concept of the magisterium hinges on this belief, going back to Jesus’ promise, “I will ask the Father, and he will give you another Advocate to be with you always, the Spirit of truth” (John 14:16-17).

Read more:
What is the meaning of the title “pope”?