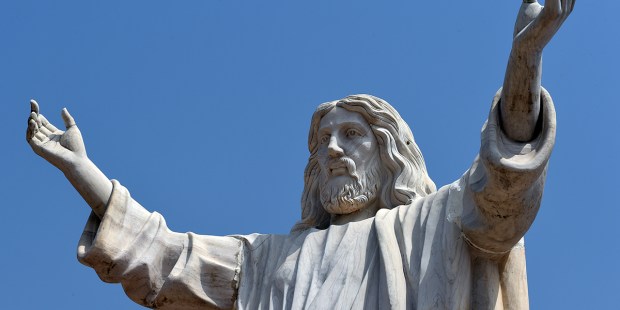 Built by a layman, this is the fifth largest statue in Africa.

Standing as a symbol of the enduring faith of Nigeria’s Catholic community, the Jesus de Greatest statue is the largest image of Christ on the African continent. Measuring 28 feet tall and weighing in at 40 tons, the statue has become an important part of the St. Aloysius Catholic Church parish in Abajah since it was unveiled in 2016.

Yahoo News reports that the statue was commissioned by Obinna Onuoha, a local oil tycoon who had previously funded the construction of St. Aloysius. The statue was created by a Chinese company, which both carved and placed the work in front of the church, but the cost was not revealed.

Obinna Onuoha told Jamaica Observer that both the statue and the funding for the church were donated in honor of his mother. When she was 68 years old she became seriously ill, and made Obinna promise that he would build a church if she survived. Similarly, the unveiling of Jesus de Greatest coincided with his parents’ 50th anniversary. Onuoha noted that he had a dream he would construct such a large statue of Christ in 1997.

During a Mass at the statue’s installation ceremony, which was attended by over 100 priests and hundreds more Catholic faithful, Bishop Augustine Tochukwu Okwuoma called the work a “very great symbol of faith” which would “remind them of the importance of Jesus Christ,” said Okwuoma.

Jesus de Greatest is the fifth largest statue in Africa, coming in behind Nelson Mandela (4th), Ramesses II (3rd), the Great Sphinx of Giza (2nd), and the African Renaissance Monument (1st). In the work, Christ is depicted barefoot, holding his arms out wide to welcome all who approach.