Teresa of Avila and John of the Cross: A friendship that defies expectations 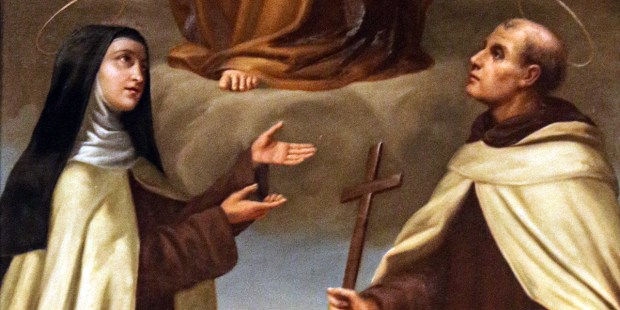 If ever there were a saint who dispels the image of a sourpuss, it would be this reformer of the Carmelites.

If ever there were a saint who dispels the notion that the universal call to holiness means becoming a sourpuss, it would be St. Teresa of Avila.

Born in 1515 at or near Avila, Spain, she is not only a canonized saint but also a Doctor of the Church. She became a reformer of the Carmelite order and an author of spiritual classics such as The Way of Perfection and The Interior Castle.

Her friendship with St. John of the Cross illustrates, however, that she was no wooden saint. The Carmelite Sisters of the Most Sacred Heart of Los Angeles describe their friendship in a way that readers will find both entertaining and inspiring.

The two first met when Teresa was 52 and beginning the foundation of her second reformed Carmel. John was 25 and a newly ordained Carmelite priest. He was considering becoming a Carthusian, but Teresa, in need of a counterpart to carry out a reform among the male communities of Carmelites, developed a friendship with him.

It’s interesting to compare Teresa’s personality to John’s. While she was probably much more noticed in a room, both embraced holiness in their own way. She was “animated, chatty and witty, a definite people person,” the Carmelite Sisters say. “She was a born leader and took center stage. Her manner of relating to others, whether they be circles of several persons or of individuals would look quite different from John’s interactions. His manner was more reserved, gentle and unnoticed, but when called upon he was quite capable of exercising leadership and good management.”

Teresa, the sisters point out, came from a well-to-do background, and she was accustomed to eating fine foods. Some observers were appalled to see her dining on partridge, apparently scandalized that she would be enjoying herself so much.

They probably didn’t know that she used a log as a pillow, but asceticism is not something to be worn on one’s sleeve.

Readers can check out the Carmelites’ description of John and Teresa’s holy friendship here.