What does JMJ stand for?

JMJ is a Catholic abbreviation used by many to dedicate a letter or work to Jesus, Mary and Joseph.

One custom that grew in popularity during the 19th and 20th centuries was writing the letters JMJ at the top of every letter or at the start of every book or written work. Archbishop Fulton Sheen is one of the most widely known public figures who frequently used that abbreviation in every television appearance.

What does JMJ stand for?

JMJ is a Catholic abbreviation used by many to dedicate a letter, book or work to Jesus, Mary and Joseph. It is both an abbreviation and a prayer.

Archbishop Fulton Sheen briefly explained how he used the abbreviation in his autobiography, Treasure in Clay.

As a custom which started in kindergarten, I always wrote ‘JMJ’ at the top of the blackboard, as I do on every piece of paper before I write — and which I hope will someday be on my tombstone. In answer to many letters, the public finally recognized me and the words Jesus, Mary, and Joseph.

It is a custom that saints such as St. Therese of Lisieux adopted as well. She would put at the top of every letter, JMJT, which adds “Teresa” to it, in honor of St. Teresa of Avila.

Writing JMJ at the top of every letter or email that you write is meant to be a reminder to offer it up to Jesus, Mary and Joseph, often asking for their guidance in what you are about to write.

With Jesus, Mary and Joseph at our side, it is less likely that we will write something nasty in our letter, remembering that our words should be pleasing to them.

Make sure to visit the slideshow below to discover some symbols used by early Christians, and which we still use today. 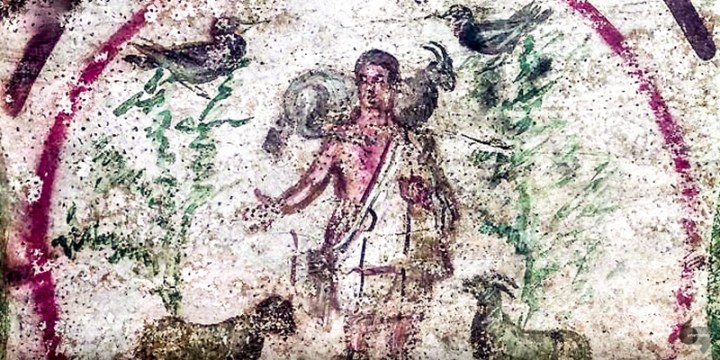