What is it like to create and deliver a homily? A layman decides to find out … 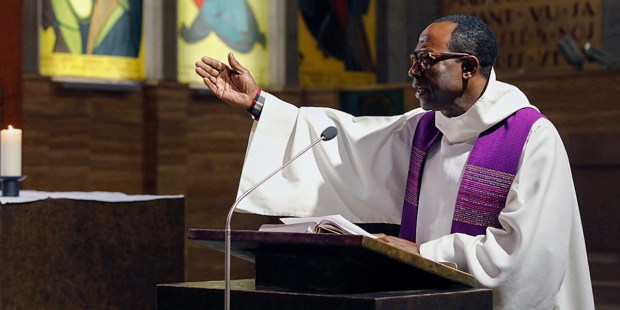 Though only a few words each week (or day), the priest has a chance to sustain souls … and attention spans.

Perhaps the best way of connecting with many parishioners at once, homilies enable a priest or deacon to share with his flock the fruit of the Spirit’s prompting in his own prayer with the Word of God and the 2,000-year tradition of the Church. Of course, the composition of an effective homily is often no easy task.

In an effort to help clergy with such matters, the Vatican’s Congregation for Divine Worship released a Homiletic Directory in 2015.

In 2018, Pope Francis urged clergy to “be brief … no more than 10 minutes, please!” However, Francis also acknowledged that parishioners “have to do their part too,” adding, “How many times have we seen people sleeping during a homily, or chatting among themselves, or outside smoking a cigarette?”

In the view of Fr. Anthony Kadavil, 12 minutes is the ideal homily length for Sundays and between three and five minutes for weekdays. “But the pressure is for an eight-minute Sunday homily and no weekday homily,” he says.

Kadavil, though now retired from his position as pastor at St. John the Baptist Church (Archdiocese of Mobile, Alabama), is as active as ever with homilies. He gets inspiration by “reading or hearing big homilists, and listening to parishioners and their problems.”

Find a homily for each Sunday from Aleteia here.

Realizing that it’s only natural for parishioners to get distracted, Kadavil supports the use of stories and jokes to help sustain listener interest. “People forget your doctrines, but they remember your anecdotes.”

As to what percent of his homilies have succeeded in impacting his audience, Kadavil says, “God alone knows.”

Deacon Paul Schwerdt, who has served as a deacon for 26 years, has lost track of exactly how many homilies he has delivered but places the number above 500. Based on the responses he gets from parishioners after the service, he feels that about 80 percent of his homilies have “achieved their purpose.”

Schwerdt, who serves at St. Junipero Serra Parish in Lancaster, California, admits he can recall delivering one homily that totally failed to sustain parishioner interest. “The service was bilingual, so I preached in Spanish, then in English. I can’t remember the topic, but I remembered that I had a lot to say … By the time I started preaching in English the body language was evident, and one of the ladies who knew me well called me out [afterwards] for preaching too long.”

In diaconate formation, Schwerdt was taught that five to seven minutes was sufficient. But he admits, “Lately, I’ve been speaking up to 12 minutes, especially if I’m ‘on a roll’ and can feel that I’ve got the congregation’s attention.” Having a printed text on hand assists him in staying on target. “And, if I do happen to ramble, I can sense it in the congregation’s body language.”

Read more:
5 Things to try if you find the homily boring

For Schwerdt, the composition process typically starts weeks in advance. He reads over the Scriptures for the particular Sunday when he will preach, and he will let those Scriptures “simmer in [his] head.” He usually spends the entire day before he presents the homily doing the actual writing.

Schwerdt’s homilies might use quotes from the works of a number of saints, but the book he uses most often is the Jerome Biblical Commentary, he said. “I’ve discovered that when I speak from my personal experiences, my homilies touch people more [and] I get more reactions from people after Mass.”

Fr. Steven Scherrer relies on prayer before undertaking his homilies. Scherrer, who was ordained 48 years ago, is currently living a monastic life in Ossining, New York. He has previously pursued that lifestyle at places ranging from Georgia to Vermont to Venezuela.

Waking up before 3 am, Scherrer prays for 60-90 minutes and then researches his homilies for about 90 minutes or more. Over the course of the day, he will write and revise each homily four times.

His research consists of reading the Gospels in Greek and then reviewing several commentaries (typically ones from the 18th and 19th centuries), from which he takes quotations and makes extensive notes. Then, with “one or two ideas” that he wishes to communicate, he starts writing. “As I write, more things occur to me.” He then thinks of examples to support his ideas.

Scherrer believes that 10-15 minutes is best for a Sunday homily and 3-4 minutes for a weekday one. However, his homilies these days are often considerably longer, because they are meant for readers online instead of a face-to-face audience.

In the view of Fr. Roger J. Landry, a priest of the Diocese of Fall River, Massachusetts, there is no “ideal homily length” that can apply to every situation. As he points out, “Preaching to children in a foreign language is different than preaching to women religious on a retreat in one’s native tongue.”

Most of Landry’s Sunday homilies average 20-25 minutes. But if he’s starting out at a parish unaccustomed to longer homilies, he might aim for 12 minutes and then gradually increase the content and length. “When the average American spends up to 30 hours a week on screens, it’s hard for the Gospel to compete if it’s too short.”

He gets inspiration for his homilies “primarily from prayer over the four readings, the liturgical prayers of the Mass, the saint of the day or the mystery being celebrated.” Once he is sufficiently inspired, he writes down a series of bullet points, which he then organizes into an outline.

Landry usually starts thinking about an upcoming Sunday homily six days in advance, and he will write it down on Saturday. “In between, I let the various ideas marinate in prayer within, paying close attention to current events and areas in which the light of God’s word could shine in places of darkness,” he says. “I also think about whatever big fears and anxieties those coming to Mass might have.”

If he sees that he’s losing the attention of parishioners who are typically attentive, then he mixes things up. He might “use a story” or “change the pacing or volume a little.” Or he might make use of a pause. “If there’s silence for five seconds, almost all the heads will turn to you to see if you’re still there.”

Landry adds that, in order to hold attention longer, “Priests, like good musicians, must vary the dynamics – the use of stories, repeating essential themes in different words, speeding up and slowing down, going loud or soft, using higher pitch or lower.”

He also points out that evaluating a homily’s degree of success can be more complex than just gauging the attention level of the audience. Furthermore, some of his homilies that he personally did not regard so highly ended up bringing “lots of people to the confessional,” while other homilies that he thought were among his best “seemed to bear little fruit.”

There are multiple ways of assessing effectiveness, and many factors to consider, when delivering a message that aims to sustain souls along with attention spans.

Read more:
Pope’s homily for 1st Word of God Sunday: Why does God give us his Word?