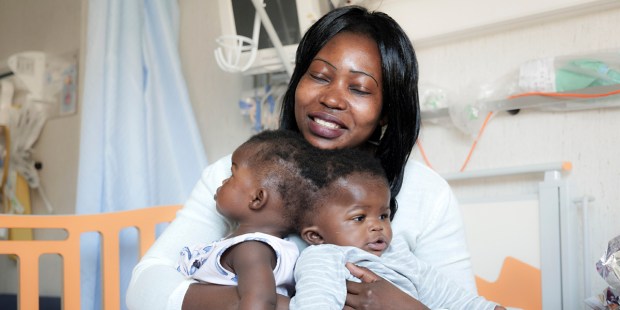 This successful procedure is a first for the medical books.

If there’s one thing life has taught us, it’s that miracles can occur in all shapes and forms. For 2-year-old conjoined twins Ervina and Prefina, the operation that successfully separated them last week was a result of the miraculous hands and coordination of 30 medical staff at the Vatican hospital.

On Tuesday, the Bambino Gesù Pediatric Hospital in the Vatican city released a statement explaining how the little girls from the Central African Republic had survived the grueling 18-hour operation that had actually taken place on June 5. The doctors reported that the toddlers, who were joined at the skull, are expected to make a complete recovery.

The complexity of the surgery was due to the fact that the girls shared a skull and a large number of blood vessels — the technical term being “total posterior craniopagus.”

According to Kake.com there has been no similarly successful procedure recorded anywhere else in the world. Described by the team as addressing “one of the rarest and most complex forms of fusion,” the planning for the surgery took a whole year.

The little girls were given the opportunity to undergo the surgery at the Vatican hospital back in 2018, when the hospital’s president, Mariella Enoc, made a visit to the Central African Republic. After coming to Italy with their mother, Ermine, the girls underwent two initial procedures in May and June, 2019.

The head of neurosurgery at the hospital shared how this “unrepeatable experience … was a very ambitious goal and we did everything to achieve it, with passion, optimism and joy.”

Thanks to the skills of the medical team the girls should be able to grow up with all their motor and cognitive functions fully intact. Their mom expressed her gratitude and her desire for Pope Francis to baptize her daughters.

“Ervina and Prefina were born twice. If we had stayed in Africa I don’t know what fate they would have had,” Ermine shared, hoping her girls would be able to go out into the world and help others by becoming doctors.