Arrest made in arson attack on Florida church with people inside 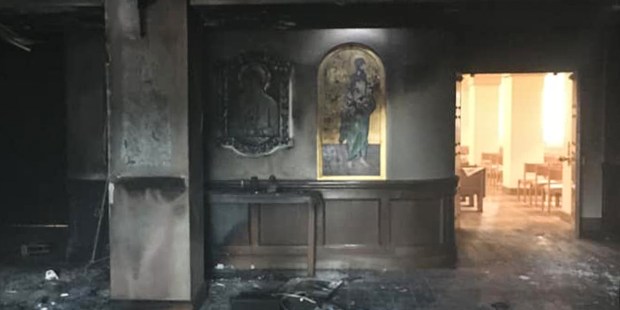 Suspect tells detective he was recently diagnosed with a mental illness and was not taking medication.

A 23-year-old man was charged with attempted second-degree murder and arson after an attack on a Florida church Saturday.

People were inside Queen of Peace Church in Ocala, when a person drove a mini-van into the front entrance, got out, and lit a gasoline-fed fire in the church’s vestibule.

According to the Associated Press, the Marion County Sheriff’s Office charged Steven Shields, 23, hours after the attack. He was being held without bail on Sunday.

No one was injured during the attack, but the fire caused significant damage.

According to the Ocala Star Banner, Shields told Detective John Lightle that he had been diagnosed with schizophrenia and is not taking his medication.

“Shields said that what he did was ‘awesome,’ and he smiled and laughed while he was questioned at the Sheriff’s Office, according to an arrest affidavit,” the newspaper said. “Referring to himself as the ‘king’ and saying he was on a ‘mission,’ Shields told the detective he has problems with the Catholic Church and made reference to several Bible passages, including the Book of Revelation.”

Jennifer Drow, senior director of communications for the Diocese of Orlando, said in a prepared statement: “We praise God that no one was injured. We join in prayer for Fr. (Patrick) O’Doherty [pastor], the parishioners of Queen of Peace Catholic Church, our first responders and the gentleman who caused the damage. May we come to know the Peace of the Lord.”

The Sheriff’s Office said it doesn’t appear that Shields was a member of the church, although he reportedly has been seen in the parking lot on several occasions.

The church’s security video shows a man wearing a white T-shirt, jeans and a baseball cap entering the building and carrying large red gas cans, according to the Sheriff’s Office. The man poured gasoline on the floor, but then slipped and fell. He’s seen throwing something into the room (it turned out to be a shoe) and igniting a large fire, the Star Banner said.

When the fire started, parishioners escaped and called 911. The man seen on the video sped away in his van. The Ocala newspaper explained:

Sheriff’s deputies happened to be near the church when the 911 call came in and quickly spotted a vehicle that matched the callers’ description. Deputy Josue Gonzales tried to stop the white van, but Shields sped east on SR 200.

The Sheriff’s Office said Shields ran several red lights and at one point crashed into two vehicles that were stopped at a stop light.

Gonzalez eventually executed a PIT maneuver and stopped the van in the 5900 block of South Pine Avenue. Shields was then taken into custody for questioning, but not arrested until later.

In a statement, Sheriff Billy Woods said: “Our freedom of worship granted in the Constitution is a freedom that we all hold dear. My deputies and I are sworn to protect that right and will always ensure our citizens can worship in peace. I’m proud of my deputies for capturing this man so quickly and we appreciate the assistance from all of the state and federal agencies that worked alongside of us during this investigation.”