In lead-up to 75th anniversary of Hiroshima, Nagasaki, US bishops pray for world at peace 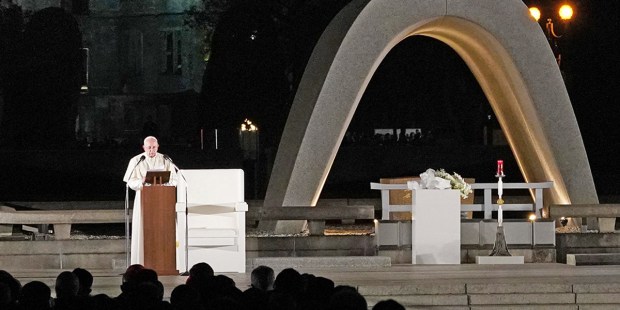 “A world of peace, free from nuclear weapons, is the aspiration of millions of men and women everywhere.”

The Bishops of the United States have made a call for prayers of peace ahead of the upcoming anniversary of the detonation of two atomic bombs on Hiroshima and Nagasaki in 1945.

“August 6 and 9 mark the 75th anniversary of the bombings of Hiroshima and Nagasaki, the first, and one hopes the last, times that atomic weapons are employed in war,” said the bishops in a statement issued by the USCCB’s Committee for International Justice and Peace released on Monday.

“The 21st century continues to witness geopolitical conflicts with state and non-state actors, increasingly sophisticated weapons, and the erosion of international arms control frameworks. The bishops of the United States steadfastly renew the urgent call to make progress on the disarmament of nuclear weapons,” the statement said.

In the statement, the Bishops recalled that “since Pope St. John Paul II’s visit to Japan in 1981, each year the Catholic Church in Japan has observed Ten Days of Prayer for Peace.” In the same vein, in observation of this 75th anniversary, they “invite Catholics in the United States, and all those of good will, to come together in solidarity in our personal prayers and Masses on Sunday, August 9.”

“The Church in the U.S. proclaims her clarion call and humble prayer for peace in our world which is God’s gift through the salvific sacrifice of Christ Jesus.”

A world of peace

Reiterating Pope Francis’s words during his visit to Nagasaki in November 2019, the Bishops affirmed that “a world of peace, free from nuclear weapons, is the aspiration of millions of men and women everywhere.”

Read more:
The two churches that survived the atomic bombs in Hiroshima and Nagasaki

On the occasion of his visit to Nagasaki, the Pope also appealed that “our response to the threat of nuclear weapons must be joint and concerted, inspired by the arduous yet constant effort to build mutual trust and thus surmount the current climate of distrust.”

At the same time, the Bishops reaffirmed the Pope’s call to “renewed effort to bring about a world of justice that is not based upon fear or the threat of nuclear annihilation but justice and human solidarity.”

Concluding the statement, the Bishops said that “fear, distrust and conflict must be supplanted by our joint commitment, by faith and in prayer, that peace and justice reign now and forever.”

The only wartime use of nuclear weapons took place during the Second World War, when the United States bombed the cities of Hiroshima and Nagasaki on August 6 and 9, 1945, respectively.

The Hiroshima bombing killed around 80,000 people instantly and caused the death of tens of thousands more. The attack on Nagasaki three days later instantly killed about 40,000 people and destroyed a large part of the city.