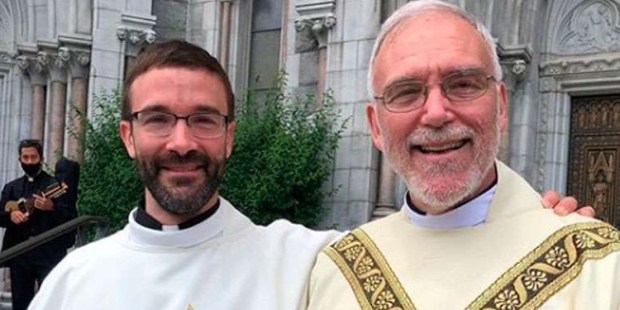 This father and son duo are priests together, and the son’s role at his father’s ordination made it that much more special.

Right after being ordained a priest for the archdiocese of Newark, New Jersey, on Father’s Day of this year (June 21, 2020), Fr. Edmond Ilg gave his first blessing to his son Philip, who is also a priest.

A father, widower, and Lutheran convert to Catholicism, Fr. Ilg—who studied chemical engineering—discovered his priestly vocation after his wife’s death.

It’s not an outcome that would have been expected based on the first part of his life. In an interview with the Spanish-language edition of news agency ACI Prensa (translated back to English for this article), he told reporter Walter Sánchez Silva,

“I was baptized Lutheran, and in my family there are various ministers of different Protestant denominations, but they respect my decision. My story is that my father married my mother in a second marriage and they had me when they were both 45 years old. It’s a miracle that I exist.”

“My parents didn’t go to Church,” he explains, “so I grew up without knowing the Lord. I can honestly say that at the age of 20 I didn’t even know the Our Father. It was only by God’s grace that I met the woman I married. We met in a bar, and that’s where our friendship started.”

When his relationship with his future wife, Connie, got serious, he started accompanying her to Mass, and eventually became Catholic.

A road of suffering and growth

He was confirmed in 1982, shortly before they were married. Later, Edmond and his wife entered the Neocatechumenal Way when their first son Philip was about 10 years old, shortly after they lost another son, Joseph, during childbirth. He told ACI Prensa that the Way helped them overcome difficulties in their marriage and made them stronger.

At the end of 2009, his wife became ill with breast cancer. He told Sánchez Silva,

“At that time, in the community, we prayed morning prayer during the chemotherapy. It was a real moment of grace. She was declared free of cancer at the end of 2010 and we were planning to go to World Youth Day in Madrid in 2011, but the cancer returned, this time in her bones and lungs. Connie died on the vigil of Pentecost in 2011.”

Before dying, she gave her son her blessing for him to become a priest, something she had initially resisted. He had entered the seminary affiliated with the Neocatechumenal Way in Washington, DC, in 2006, and was ordained in 2016.

Edmond’s call to the priesthood came after he was widowed, but not immediately. For a while after his wife’s death he had a serious relationship with another woman, but he was open to God’s call. “At one point I prayed intensely for discernment and our Lord answered me very clearly,” he told ACI Prensa. “The day after that prayer, I received an e-mail for a mission meeting. The following weekend I quit my job and started the mission in a parish.”

During his time assisting as a lay missionary, he began to think about the priesthood. He said,

“Daily prayers and sharing life with people were a great help in my growth as a Christian. In 2013, the parish made a pilgrimage to Canada to the shrine of the North American martyrs. That was very significant for me because, as a family, we had made this pilgrimage in 2002 when Pope John Paul II went to Toronto for World Youth Day. The trip marked my son and it was there that he began his journey to the priesthood.”

Fr. Edmond was ordained with nine other priests at the Cathedral Basilica of the Sacred Heart in Newark. His son’s presence made the ceremony that much more special. The elder Fr. Ilg told ACI Prensa, “It was a blessing to have Philip vest me as a priest.” Fr. Edmond, 61, entered the seminary when he was 54.

He told the report reporter Sánchez Silva that he would never have dared to enter priestly ministry if he had thought he would have to do it alone.

“The projects I’ve undertaken in my life using only my own will and strength were not successful, but I saw God doing wonderful things with weak people who put themselves in His hands. No matter how many years He gives me in His service, this is a great blessing in a life He has blessed so much.”