The American who restored the priceless mosaics of Hagia Sophia 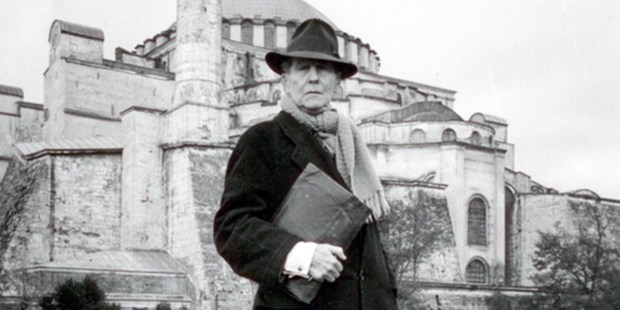 Boston-born Thomas Whittemore, a friend of Turkish reformer Atatürk, uncovered the gems that had been hidden for 500 years.

If Istanbul’s Hagia Sophia gets turned into a mosque, as many expect it will, its precious Byzantine mosaic icons are likely to be covered up during Muslim prayers. The mosaics were plastered over for centuries when the former cathedral of the Church of Constantinople served as a place of Muslim worship.

On July 10, in an address to the nation, Turkey’s President, Recep Tayyip Erdoğan, announced that Hagia Sophia would be reopened for Muslim worship on July 24. The Turkish Council of State annulled the decree of November 24, 1934, to turn the building into a museum.

For nearly a century, tourists and pilgrims visiting Hagia Sophia have been wowed by the architecture of the 6th-century church, but also the timeless beauty of its mosaics.

Those who have gazed on the icons have an American to thank. Thomas Whittemore, a Massachusetts native who founded the Byzantine Institute, an organization that specialized in the study, restoration, and conservation of Byzantine art and architecture, undertook the restoration and conservation project at Hagia Sophia in December 1931.

Four years later, the cathedral-turned-mosque reopened as a museum.

According to the website of Dumbarton Oaks, a research institute of Harvard University supporting scholarship in Byzantine and Pre-Columbian studies, Whittemore began his career as an English professor at Tufts. But he soon developed an interest in antiquity. After studying architecture at the Sorbonne, he toured England, Italy, Russia, Bulgaria, and Germany. He later got involved in archaeology in Egypt.

While working with the Egypt Exploration Society (EES) in the early 1910s, Whittemore also traveled extensively throughout Europe. After the First World War broke out in 1914, he witnessed destruction and upheaval. In Paris, he joined the Red Cross just months after the fighting began and devoted himself entirely to relief work for the remainder of the war. This work took him as far as Bulgaria and Russia.

After the war, Whittemore was named a “Special Collaborator in the Bureau of Education,” an organization that was administered by the Department of the Interior, and was tasked with studying foreign educational systems while conducting relief work and architectural studies overseas (particularly in Russia and Bulgaria).

Traveling between the United States and Russia at a time of great change — the revolutions of 1917 — at one point he had to go through Istanbul to get back to Russia. He found and assisted Russians seeking shelter in Turkish cities. Istanbul became his base. On a cruise through the Greek islands in 1923, Whittemore and a friend traveled to several monasteries on Mount Athos in order to deliver food and supplies to Russian and Bulgarian monks struggling financially after the Russian Revolution.

“Visiting such marvels as the Hagia Sophia during his various trips to Turkey, he found himself held captive by the wonders of the East,” said Dumbarton Oaks. “It was likely this prolonged period of repeated immersion that reawakened the professor-archaeologist that had lain dormant within Whittemore throughout World War I—that helped to inspire the Byzantine Institute’s conception and its most famous undertaking: the restoration and conservation of the prized mosaics that line the interior of the Hagia Sophia.”

Meanwhile, the Ottoman Empire, like the Russian Empire, was about to give way to a new regime. Kemal Mustafa Atatürk would transform Turkey into a secular state, replace the Arabic script with a modified Latin alphabet, and turn Hagia Sophia into a museum. Whittemore entered into negotiations with the Turkish government concerning the restoration and conservation of Hagia Sophia. Permission was finally obtained in December 1931.

The work involved first removing the plaster that had covered the mosaics. Of the radical and sudden transformation of Hagia Sophia from an active mosque to a secular museum in 1931 Whittemore wrote: “Santa Sophia was a mosque the day that I talked to him. The next morning, when I went to the mosque, there was a sign on the door written in Atatürk’s own hand. It said: ‘The museum is closed for repairs'”

The Vimeo page of Dumbarton Oaks has several old films of Whittemore and his team restoring the mosaics in Hagia Sophia.