Catholic churches across U.S. suffer week of vandalism and arson 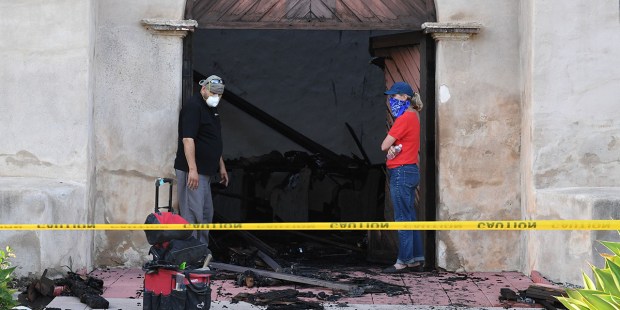 A church connected with the founder of the Knights of Columbus was desecrated in an attack on Thursday.

A week of vandalism and arson have left churches in the United States damaged but Church leaders and parishioners prayerful.

Statues of Jesus and Mary were beheaded or spray-painted, doors were covered with graffiti, and churches were burned, one quite clearly an act of arson.

Incidents of vandalism around the country included:

Queens, New York. Shortly after 3 a.m. on Friday, July 10, a statue of the Blessed Virgin Mary that has stood in front of Cathedral Prepartory School in Queens, New York, for over 100 years was spray painted with the word IDOL on front. Police are continuing to search for an individual shown on the school’s security camera. Over the next few days, workers from the Diocese of Brooklyn’s Catholic Cemeteries cleaned the statue, which the school rededicated on Thursday, the feast of Our Lady of Mt. Carmel.

Ocala, Florida. In Ocala, Florida, Saturday morning, July 11, parishioners were gathered for morning Mass when a minivan crashed into the front of Queen of Peace church. A 23-year-old man allegedly got out of the car and spread gasoline around the lobby, then lit it on fire. No one was hurt, but the fire did extensive damage. Police later caught the suspect, who was charged with attempted second-degree murder and arson. According to local media, the suspect told investigators that he was recently diagnosed with a mental illness but was not taking his prescribed medication. He also reportedly told them he had problems with the Catholic Church.

Los Angeles. Across the country the same day, another fire broke out at Mission San Gabriel Arcángel in Los Angeles, which was founded by St. Junipero Serra in 1771. (In the wake of nationwide protests regarding racial injustice, which led to the dismantling of statues of Confederate heroes, statues of Serra also became targets of destruction because of his alleged mistreatment of Native Americans.)

The timber roof and sections of the interior of the mission church were destroyed. No one was injured.

“Federal and local officials are still investigating the cause of the fire at the San Gabriel mission, with no determination yet made,” Catholic News Agency reported July 12. “On Sunday, the Los Angeles Times reported that agents from the federal Bureau of Alcohol, Tobacco, Firearms and Explosives were investigating the possibility that the fire was an arson attack.”

“What a strange time we’re living in,” tweeted Bishop Richard Stika of Knoxville. “This is occurring at various spots throughout the United States.”

ABC News9 said that Chattanooga police forwarded their report to the Department of Homeland Security as a possible hate crime.

Boston. A statue of the Blessed Virgin Mary at St. Pater’s church in Boston’s Dorchester neighborhood sustained burns Saturday night, July 11. Fire investigators said that apparently someone lit the plastic flowers that had been placed in the statue’s hands, leaving the upper body and face charred. The statue was erected decades ago to memorialize servicemen killed in the Second World War.

Calgary, Alberta, Canada. On Tuesday, July 14, a statue of the Sacred Heart of Jesus at Sacred Heart church in Calgary was defaced with spray paint and marker or chalk. A surveillance video shows the defacement being carried out by two young people. As police took up the new case, they were still searching for suspects after several statues at the Grotto of Our Lady of Lourdes in Ontario had their heads cut off with a power saw or grinder, the Daily Caller reported.

“At some point between about 9:00 p.m. last night and 6:00 a.m today, there was an act of vandalism at St. Joseph church, where words and various symbols including a satanic one were painted on the outside doors of the church,” Dominican Fr. John Paul Walker, the pastor, wrote on the parish’s Facebook page Thursday. The symbol was an upside-down pentagram within a circle, Fr. Walker confirmed to Aleteia.

He asked parishioners to “pray to Our Lord in reparation for this sacrilege, and to St. Michael for protection against all the powers of hell. Please pray, too, for the perpetrator of this action, who is clearly a very disturbed individual in need of serious help.”

The Archdiocese of Hartford, Connecticut, said on its Facebook page that the graffiti also included an anarchist symbol. “This follows an apparent trend of desecrating Catholic spaces throughout the nation, as evidenced by incidents in Chattanooga, Queens, Boston, Sacramento, and Ocala,” the archdiocese said. “The underlying motive of these sacrilegious attacks is clear: to intimidate and instill fear in the hearts of those who worship Christ. However, our cherished Catholic faith has survived for 2,000 years in the faces of many different oppressors, and it is not about to yield now. Therefore, we remain unafraid and resolute in our faith, and we will pray for a conversion of the hearts of those who wish to terrorize us.”

Fr. Walker said on Friday that the church was open again after the graffiti had been removed and priests prayed “the appropriate exorcism prayers.” Opening hours would be limited.