Imaginary popes: A review of George Weigel’s ‘The Next Pope’ 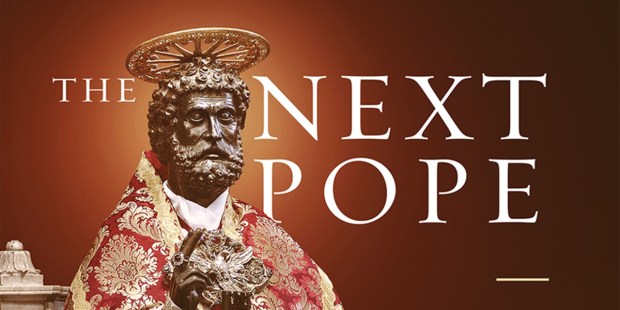 Reading it polemically will miss Weigel’s broader purpose: explaining the papacy and the Church

As imaginary popes go His Holiness Pope Pius XIII, HBO’s The Young Pope (2016), is somewhere described as “10 episodes of dramatic poppycock.” The few episodes I watched I kept thinking of something along the lines of The Days of Our Lives.

More recently, Netflix’s The Two Popes imagined two very nice guys, either of whom, cinematically at any rate, would do as well or better than anybody presently living. Think of Two as an alternative history, which is not history at all but only as someone thought it should have been.

Now George Weigel’s imagination is at work. Weigel, the definitive biographer of Pope St. John Paul II, describes his imaginary pope in The Next Pope: The Office of Peter and a Church in Mission.

This isn’t exactly imaginary but it is certainly aspirational. It is a well developed series of prescriptive assignments, buttressed with Church history, a vigorous theology of the papacy, and evocative descriptions of how the next pope should lead the Church if it is to be the Church of the New Evangelization. This exploration covers papal relations with the bishops, with priests, and with the lay apostolate, and describes the innate dignity of baptism and mission. It also includes stern advice to the next pope to clean out the Roman curia, and sooner is better than later and, oh, my, yes, fix the money.

Weigel’s book is not to be confused with another book of the same title, The Next Pope: The Leading Cardinal Candidates, written by Edward Pentin, the Vatican correspondent for the National Catholic Register. Pentin’s work is a voter’s guide for the cardinals attending the next conclave, assessing 19 papabili (cardinals able to be pope). Someone put it, “Many popes go to conclave, but only one cardinal remains.” Pick any 19 cardinals and surely you have picked at least one pope. This is not what Weigel has done.

Read more:
This Filipino cardinal could one day be pope; for now, he tells us how he nearly missed being a priest

The unavoidable temptation in reading Weigel’s next pope is the inclination to see it as a sometimes overt comparison to the present pope. The next pope, you bet, he’d be ever so clever in avoiding the mistakes of the present pope by following the thorough but simple well-marked path laid out by the writer, generally explaining to the next pope how to avoid being a pope like the present pope, or those other ones sometime before.

The Next Pope, though shorn of anything resembling polemic, sounds something like that here and there. How could it not? Given the last three occupants of the Holy See since the late-20th and into the early 21st century, there are plenty of comparisons to draw, and probably not without reason. The question is whether the comparisons are fair. I would say they are. The ones I encountered seemed reasonable and I’d describe them more as gentle observations, gently made.

So, while Next is not a polemic, neither did I miss the occasional contrasts even if no names were mentioned. I merely note the implications of the title in the minds of some readers and warn, reading it polemically will miss Weigel’s broader purpose: explaining the papacy and the Church and the array of challenges awaiting the next pope leading the Church, and all that without personal presuppositions about any pope.

The trouble with popes – past, present, future – is you get the pope you got and that’s all. As former secretary of defense Donald Rumsfeld similarly noted about the U.S. army in Iraq, “You go to war with the army you have, not the army you might want.” Ignoring the war imagery and the occasional inflamed English monk demanding Pope Francis’ resignation, it’s the same with popes, I’d suppose.

In any event, The Next Pope is about a transitional pope. All popes are in some sense transitional, of course. But this next one, obviously, will not have had any of the same counciliar experience with Vatican II as his three predecessors. The next pope will have been a teenager, perhaps a child when the Council was meeting. John-Paul II was 58 when elected. Another 58-year-old pope would have been a year old when Vatican II held its first session; a year on from now the next pope might not have even been born when the Council launched. In any of those instances, the next pope will not have been directly shaped by Vatican II participation, not in the way that John Paul II, Benedict, and Francis each experienced Vatican II.

This will be the transition the next pope will encounter, if not lead: a Church that is in some parts of the world still in desperate need of re-evangelization for evangelistic mission. Equally, the debates about how the Vatican II documents should be received, whether as a seismic break with the Catholic past or as being in continuity with Church teaching and practice, will not have troubled him overly much. If, as Weigel says, the pontificates of John Paul II and Benedict XVI “can be understood as a single, 35-year effort to give the Council an authoritative interpretation” then the next pope will regard the New Evangelization as an unquestioned description of what a “communion of disciples in mission” must look like.

Put it this way, if the Church can no longer be the retrenched Counter-Reformation Church of the 1950s, then it must become, again, something like John XXIII envisioned: that band of disciples gathered with Peter in fellowship with Christ at the head. The next pope must be that pope. Weigel is very deliberate in asserting the nature of the Petrine Ministry, spinning it up for the coming papal transition, leading an institutionally reformed missionary Church.

* will be doctrinally orthodox but not sedate, energetically rooted in tradition and deferential to it;

* will be a man of deep, evident, and sincere personal piety that can be worn lightly;

* must be media savvy;

* will revitalize Christian humanism by defining a Christian anthropology that begins with Man in destiny with Christ;

* will dig beyond or below the College of Bishops (from which most episcopal nominations now come) to find new bishops as vacancies occur, and seek the recommendations of laity and priests;

* must swiftly remove bishops whose personal behaviors or administrative ineptitude have become a scandal or impediment to the Gospel, or who teach a doctrine other than that of the Catholic Church;

* will have some experience in collaborative governance (or a willingness to learn).

I have not by any means comprehensively covered Weigel’s to-do list for the next pope. But The Next Pope is broad and it is winsomely engaging. There are 12 central chapters. I can imagine a next pope, though I don’t know who or when, spending, let’s say, a month in each chapter; a year absorbing the characteristics of a robust, lionized papacy?

There are things, I think, not beyond imagining.

Read more:
In ‘The Two Popes’ movie, what is truth and what is fiction?