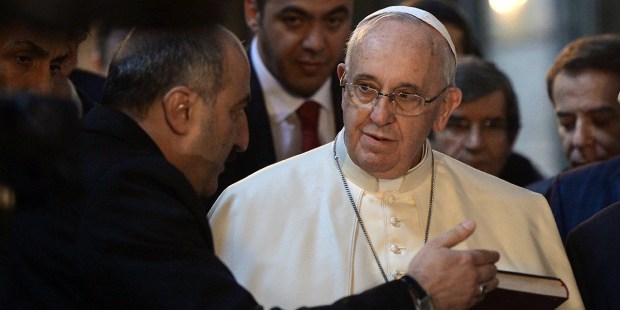 The president of Turkey has invited a number of world leaders — including Pope Francis — to Istanbul Friday to witness the conversion of an ancient Christian church into a mosque.

President Recep Tayyip Erdoğan, who successfully orchestrated the reopening of Hagia Sophia as a mosque, invited Francis to the “opening ceremony of Islamic prayer” in the massive stone structure in Istanbul, according to the French Catholic i.Media news agency. The Holy See has not confirmed the information.

Francis visited Hagia Sophia during a visit to Turkey in 2014 (photo above). The structure had been built in the 6th century as a Christian cathedral but was transformed into a mosque in 1453 by the invading Ottomans. Since 1934, it has been a museum.

About 1,000 to 1,500 people are expected to attend this week’s Friday Prayers inside Hagia Sophia, to be led by Ali Erbaş, head of Turkey’s Directorate of Religious Affairs (the Diyanet), according to the Turkish Hürriyet Daily News.

The newspaper said that Erdoğan paid a visit to Hagia Sophia on Sunday, inspecting the conversion work.

Hagia Sophia is open to all, “believers and non-believers,” a spokesman for Erdogan told CNN.

Hürriyet said that the Christian mosaics and frescoes in Hagia Sophia will be covered by curtains during the prayers. “The curtains’ mechanism will be similar to those used in movie industry,” it said. Not even a nail would be pounded into the stone work.

Accordingly, the 6.5-meter Theotokos and 7.5-meter Gabriel mosaics, which are seen from the ground floor, will be opened and closed with curtains, for one minute each.

The rugs being installed, on which Muslim worshippers will prostrate themselves during prayer, are being produced in western Manisa province, in one of Turkey’s first factories where rugs were woven with machinery, the newspaper said. “Made from 100 percent indigenous wool, the duck-head-green rugs carry motifs of 17th-century Ottoman era.”

During his weekly Angelus address July 12, the pope said that he thinks of Istanbul and of Hagia Sophia, “and I am very saddened.”

The president of Greece, Katerina Sakellaropoulou, called Pope Francis Monday, urging him to advocate for the preservation of the status quo regarding the building, Catholic News Agency said. The decision to make it a mosque “deeply hurts those who consider this top symbol of Christianity to belong to humanity and the world’s cultural heritage,” according to a statement from the president’s office. Hagia Sophia is part of a UNESCO world heritage site.

[Sakellaropoulou] said that the move should be “explicitly and unequivocally condemned” by the international community, and asked Pope Francis to help garner international support so that the Turkish leadership revokes its decision and restores Hagia Sophia to the status of a protected monument.

According to the Greek government communiqué, Pope Francis acknowledged the political motives of Turkish president Recep Tayyip Erdoğan’s decision, which Sakellaropoulou described as diverting Turkey from the values of the secular state and the principles of tolerance and pluralism.

On Tuesday, the United States Conference of Catholic Bishops joined with the Greek Orthodox Archdiocese of America in calling for a “Day of Mourning” on Friday, July 24, when the conversion of the building into a mosque takes place.

“We join the Greek Orthodox Archdiocese of America in offering our prayers for the restoration of Hagia Sophia as a place of prayer and reflection for all peoples,” the bishops’ conference said. “The museum was a place of encounter and dialogue between people of all faiths and cultures. The Greek Orthodox have asked that every Church toll its bells, every flag be raised to half-mast and that the Akathist Hymn is chanted in the evening. For Catholics unfamiliar with the Akathist Hymn, the recitation of the Rosary is recommended, as both prayers entreat the Mother of God for her intercession.”