Extreme athlete goes the distance to raise awareness and funds for elderly suffering isolation during the pandemic.

Corey Cappelloni is an extreme athlete who has set himself impressive goals such as running six days in a row in the Sahara desert, which is considered the most exhausting race of all ultra-marathons.

These days he’s exchanged the desert for the roads from Washington, D.C., where he lives, to his hometown of Scranton, Pennsylvania. His 98-year-old grandmother Ruth lives there and was isolated while recovering from COVID-19.

His motivation wasn’t just to give his grandmother, who is confined to a nursing home, a hug from afar. The athlete ran the 220 miles for a cause: to raise awareness of the isolation of the elderly during the pandemic.

“Run for Ruth” was the motto of this amazing endurance run -– the longest and most rewarding in Cappelloni’s life -– which ended on June 19 in front of Allied Services Skilled Nursing and Rehabilitation Center in Scranton. 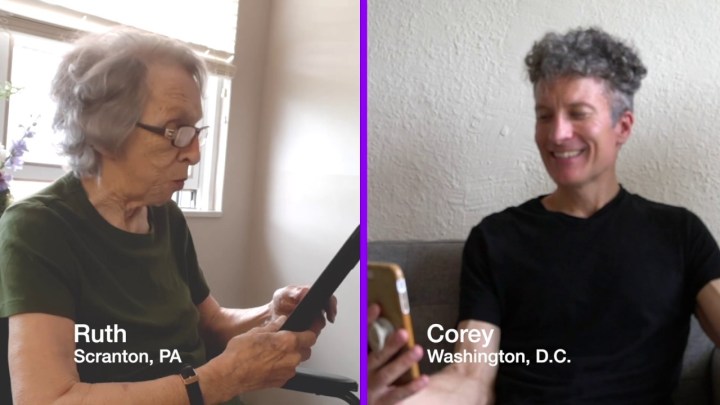 He left D.C. seven days earlier and his race had a specific goal: to raise money to buy smartphones and tablets for elderly people isolated due to COVID-19, so that they can communicate with their loved ones.

Ruth’s grandson, who affectionately calls her Nana, was greeted with cheers by the personnel at the center where his grandmother is staying. From the fourth floor, Ruth greeted him from the window. A sign posted on the ledge said, “I love you, Corey.”

Dozens of workers from the Allied Services Skilled Nursing and Rehabilitation Center applauded as he crossed the finish line. Breathless but smiling, he pointed to Nana’s fourth-floor room, where she was watching him through the window.

Then they talked on their cell phones. Corey had a microphone in his hand so those around him could hear the conversation, in which he thanked the Center’s staff, expressed the love that he and so many other people have for Ruth, and assured her that he had always been confident in her strength to fight the coronavirus.

Read more:
Spanish actor chooses to “quaran-team” with his great-grand-aunt

Run for a cause

Thanks to “Run for Ruth,” Corey has been able to raise nearly $25,000 to date for the purchase of cell phones and tablets for the elderly and coronavirus patients to use to communicate with their loved ones and feel less alone.

With this run, Cappelloni wanted to make visible the problems that are currently being experienced in nursing homes, which are so vulnerable to the coronavirus. He also wanted to honor all the virus’s victims, including Charles Gloman, his great-uncle, who died during this pandemic on May 11.

His grandmother Ruth also went through difficult moments when she contracted the virus. Cappelloni was staying up-to-date on her condition while he was running. Almost at the end of the race, when he was tired and worried, he received a message from his girlfriend, who was accompanying him by car. She told him that Nana had recovered.

“She had some very rough days,” said Cappelloni, “but she fought through them,” he told Runnersworld. She was the motivation for him to keep running throughout those seven days; love was the driving force behind this supreme effort.

“Why I decided to do this was to show my grandmother that I’m here for her and that I really care for her,” Cappelloni told AP, “because she has always been there for me from when I was born.”