Here’s what we’re reading this summer: A book list 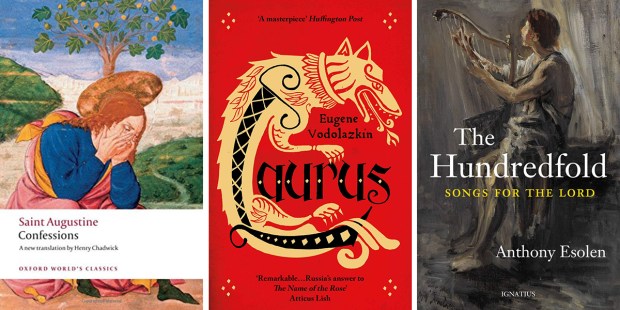 Aleteia writers on what books they are taking to the beach — or maybe the backyard — this summer.

Perhaps there has never been a summer so perfectly arranged for reading. With fewer places to go and fewer people to see, there is little that stands between you and hours spent blissfully alone with a good book.

We asked some of our writers (apologies to any we left out!) what they are reading this summer, and here’s what they told us. It’s a wonderfully eclectic list — hope you enjoy it:

Sr. Theresa Aletheia:  “I am currently reading The Duty of Delight: The Diaries of Dorothy Day. There’s something captivating and consoling about the way Dorothy describes her efforts to work for social justice amid mundane but also truly difficult struggles. I’m also tackling Analogia Entis by Erich Przywara with a friend. I love reading dense, frustrating books with other people; it makes it so much more enjoyable. And I am looking forward to reading the new release, Complaints of the Saints, by one of my sisters, Sr. Mary Lea Hill. Known as “The Crabby Mystic.” Her books are witty and make a life of holiness seem more accessible. I can’t wait to learn more about the saints’ humanity in her new book; I find realistic portrayals of the saints inspire me more to pursue holiness. I’m confident her book will help me and other readers to think, “Oh yeah maybe heroic holiness is something God can help me to live.”

Matt Becklo: This summer I’ve been reading some insightful works of theology by Hans Urs von Balthasar and Henri de Lubac. But I also just finished reading C.S. Lewis’ The Lion, the Witch and the Wardrobe (and started reading Prince Caspian) with my two older daughters, who are six and four years old. It’s my first time reading these books, and to read them through the eyes of my children—who have been both challenged by and excited about the journey, brilliantly picking up on little details and connections as we go—has been wonderful. This goes without saying, but I recommend them heartily—not only for kids but for adults too!

John Burger: I’m reading Witness to Apparitions and Persecutions in the USSR, by Josyp Terelya with Michael H. Brown (Faith Publishing Company, 1991). One of the leaders in the effort to get the Soviet Union to legalize the Ukrainian Greek Catholic Church, Josyp Terelya spent years in and out of Soviet prisons, labor camps and psychiatric hospitals, and playing a cat-and-mouse game with the KGB. He also claims to have been visited in solitary confinement by the Blessed Virgin Mary and St. Michael the Archangel. Terelya tells a gripping tale of jail breaks, harsh prison conditions and, most importantly, fidelity to the Catholic faith. At a time when the COVID-19 pandemic is preventing many people from going to church, it’s inspiring to read how Catholics led their lives of faith at a time when their Church was forced underground.

Zelda Caldwell: This summer I decided to dive into Alexander Solzhenitsyn’s Gulag Archipelago. The Russian writer’s description of the Soviet police state and his 10 years spent in its prison system is a witness to the results of an ideology that, in practice, denies the humanity — and the sacredness — of man. It’s been recommended to me for years, but somehow, now seemed the right time to read it.

Lucien de Guise: Having seen the stage show and three different film versions of Les Miserables, the time had come to read the book. It took Victor Hugo almost 20 years to write and it has taken me almost a year to finish. It is 1,300 pages of superb storytelling mixed in with more detailed analysis of French history than most readers will want. I can’t think of a better tale of redemption, in which the Catholic message is driven home so effectively. Hugo had an ambivalent relationship with the Church, which is why it’s such a relief to find the most unquestionably decent person in this book is a Catholic prelate.

Daniel Esparza: I’m re-reading Augustine’s Confessions, yet with some interesting additional guides. I’m keeping Phillip Cary’s Augustine’s Invention of the Inner Self  at hand — a wonderful book explaining Augustine’s intellectual (and somehow spiritual) journey from Cicero and Virgil to Plotinus.

Cerith Gardiner: I am planning on reading L’Avare (The Miser) by Molière in French. It’s a classic comedy about a father who is so totally obsessed with money that he tries to marry off his children to people they don’t love just to boost his coffers. It’s an excellent piece that highlights the conflicts in relationships due to materialism as well as the genius of Molière as a writer.

I’m also planning on reading Anne Frank’s The Diary of a Young Girl again. I think it will be very interesting to re-read it having been in lockdown. It’ll certainly stop me feeling grumpy about missing out on fun occasions as. let’s face it, it could have been a whole lot worse

Kathleen N. Hattrup: I’m reading The Spanish Civil War by Hugh Thomas. My interest in learning about the war was piqued by the fact that over and over again, I wander into a church and find the remains of a “blessed” or “saint” who was martyred in the war. And it was such a short time ago! One day we were chatting with an elderly priest who was crossing the street at the same time as us, and he told us that he remembered having to flee his house when he was only six years old. The book is a hefty volume and I don’t know how justly it will portray the suffering of the Church (or its causes), but I’m eager to learn more about this chapter of history that I don’t think was covered in my (American) school.

Tom Hoopes: My reading (and listening) list for the summer includes:

Hillbilly Elegy (memoir) by J.D. Vance (Harper, 2016): I have always hated the phrase “white-trash” and never found “people of Walmart” photos funny. This eyebrow- (and hair-) raising book explains why. Part memoir and part socio-economic lesson, Vance teaches compassion and understanding for the Southern poor whose language, addictions, and lifestyle (uncensored by the author) may not be noble, but whose faith, loyalty, and humanity are.

Napoleon: A Life (biography) by Andrew Roberts (Penguin Books, 2015): Called “the definitive biography” of the great military leader this 976-page book is fascinating, and reveals much about the one-time Emperor of France and his relationship with Catholic morality and Catholic Europe (and Muslim morality and the Islamic East). Reading between the lines  you can see the clever way the Church navigated these difficult times, for instance Pius VII’s handling of the coronation of Napoleon.

The Convenience Store Woman (fiction)  by Sayaka Murata, Ginny Tapley Takemori (Translator) (Grove Press, 2018): This strange story by one of Japan’s bestselling authors is narrated by an apparently autistic (or sociopathic? we are never told which) woman who defines her life by the employee manual of the Smile Mart. The book functions as a satire (or unflinching revelation?) of the soullessness of our consumerist society and what it would look like if someone were to take it seriously.

In Search of Black History With Bonnie Greer (podcast) (2019, Audible Originals) This fascinating overview of Black history (in eight episodes) by a playwright is an eye-opening take on world history centered on a people that are often ignored. Africa and its people weren’t “discovered” in this telling, but are the very cradle of humanity itself. One (major) flaw: The author is quick to forgive the racism of some — even the scientific racism of Charles Darwin — but refuses to appreciate the positive contributions of Christianity and the Catholic Church even when describing the depiction of San Moritz as an African or the work of Christian abolitionists.

Cecilia Pigg: I’m reading The Hundredfold: Songs for the Lord by Anthony Esolen. It’s a book of poems about Jesus and different people from the Bible. My husband surprised me with it, and I’m so glad he did! It’s beautiful and eye-opening. This is not a vacation read, more of a “read one poem a day and think about it” read. It helps me to dive into familiar Bible stories with fresh eyes, but mostly, it helps me love Jesus more. Powerful stuff.

Fr. Michael Rennier: I recently read Laurus, by Eugene Vodolazkin, a book about a Russian holy man and healer who embarks on a pilgrimage to Jerusalem. Laurus is a book both beautiful and challenging. Through beauty and wonder, it encouraged me to slow down, concentrate, and see the mysterious, wild heart that runs like a river throughout our world.

Sarah Robsdottir: I always like to be “nose deep” in two books at the same time — one for fun and one for growth (spiritual or intellectual, something that helps me make sense of the world). So in the fun category, I’m reading Half Broke Horses by Jeanette Walls, the former MSNBC gossip columnist, whose autobiography The Glass Castle won much recognition (and was turned into a movie). Half Broke Horses dovetails with The Glass Castle as a “real-life novel,” telling the life story of Walls’ grandmother Lily Casey Smith — a remarkably accomplished woman who began her adult journey at 15 years old by riding alone 500 miles across the country on a pony to teach in a one-room school house. I can’t put it down!

As far as my morning devotional book for spiritual growth, I’m into Mother Angelica’s Guide to Practical Holiness. This is the fourth one of hers I’ve read, and all I know is that when I start my day with Mother Angelica, the world makes so much more sense. This beloved foundress of EWTN did most of her writing while sitting in the presence of the Blessed Sacrament, and it really shows; Jesus just seems to reverberate off the pages. She’s always full of humor, honesty and practical tips to grow in holiness. Here’s her latest sentiment that’s got me smiling: “Faith is one foot on the ground, one foot in the air, and a queasy feeling in the stomach!”