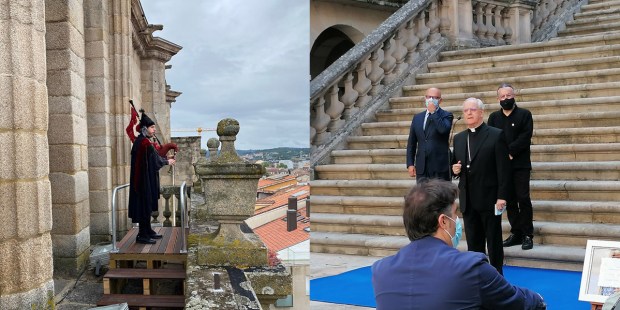 A bishop in Spain has found a special way to honor and remember victims of the pandemic.

Bagpipes are often associated with Scotland, but they’re popular in other parts of the world as well: In the extreme northwest of Spain and Portugal, the sound of the Galician bagpipe has accompanied the life of the people for more than eight centuries. Its music provides the traditional soundtrack as they sing and dance, celebrate banquets, dance around brides, celebrate anniversaries, and bid farewell to their deceased. These are joys and sorrows that the bagpipe captures in its melodies, heard far and wide.

A melody that reaches everyone

As the pandemic has had such an impact in Spain and around the world, the bishop of Ourense in Galicia, His Excellency Leonardo Lemos, wanted to find a way of remembering the dead. Looking for something that would resonate with local culture and hold great emotional significance, he settled on the Galician bagpipe and established a new local tradition: From now on, every day a bagpiper will play a hymn from the bell tower of Ourense’s Cathedral of San Martiño.

On the day the new tradition was inaugurated, June 30, 2020, bagpiper Bieito Romero was the musician in charge of paying tribute to the victims of the pandemic.

“When we hear the sound of the bagpipes from the tower of the Cathedral of San Martiño, let us think in a special way of those who left us, and those who are suffering and continue to suffer the consequences of the pandemic,” said the bishop, who was accompanied by the president of the Provincial Council of Ourense, Manuel Baltar.

During this act, so rooted in Galician culture, Bishop Lemos recalled the active role of Catholics: “The Church in Ourense, which I have the honor of presiding over with the help of the priests, has been working together with all the civil authorities and health institutions from the very beginning.”

“I will never forget it”

For Bieito Romero, playing the provincial hymn of Ourense in a place so linked to the roots of Galicia, as a tribute to the victims of the pandemic all over the world, was more than emotional: “I will never forget it in my entire life,” he told the newspaper El Faro de Vigo.

Every day a different bagpiper will be in charge of playing the hymn. The fashion company Adolfo Domínguez joined the initiative and wanted to provide a cape specially designed for those who have the honor of playing the bagpipes on the balcony of the cathedral’s bell tower.

The president of the Provincial Council stressed that in this way, the figure of the Cathedral’s Bagpiper—a role that will be taken on by members of various folklore groups—will be “a symbol that highlights solidarity, music, tradition and culture, from the unique monument which is Ourense’s Cathedral.”

Read more:
Group of pilgrims trapped together in Spain become like family