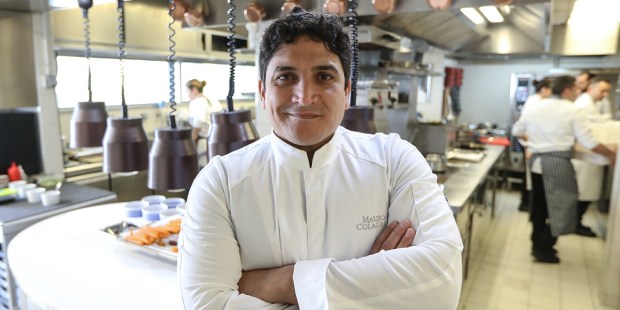 When the pandemic forced his restaurant doors to close, he found a way to use his exceptional culinary skills to fight the virus.

Mauro Colagreco is the only Argentinean chef who has been awarded three Michelin stars, the highest distinction for international cuisine. His restaurant on the French Riviera, Mirazur, is considered to be one of the best in the world, but when it was forced to close its doors temporarily, Colagreco found a way to use his culinary skills to serve the community.

During normal times, Mirazur does great business: Eating there, with drinks included, can cost from 350 to 400 euros (or about $400 to $460 US dollars). But in March, Mirazur had to close its doors due to the coronavirus lockdown. Within days of the reopening in June, Mirazur had already filled up all its reservations for the rest of the year. It is, after all, ranked number 1 in the 2019 edition of The World’s 50 Best Restaurants.

The months of closed doors were not a rest for Mirazur’s staff, however. Colagreco and part of Mirazur’s team, instead of standing idly by, used this time and their considerable talents to aid in the fight against the virus. On April 2, Mirazur’s kitchen, so exclusive that its menu is a surprise every day, moved its headquarters to nearby La Palmosa Hospital to cook for the health care staff.

Twice a week for two months, the cooks prepared meals to nourish and honor those who were facing the pandemic on the front lines. They gave these hospital meals the same elegance and combination of flavors as their dishes at Mirazur. One Thursday, for example, as an appetizer they served cabbage salad with turnips, red radishes, salmon, coriander and lemon. As a main course, they prepared focaccia with herb mayonnaise, ham, Emmental cheese, eggs, tomatoes and salad; for dessert, lemon pie. Everything was made with products from the restaurant’s garden, from which its menu is usually nourished, and donations from local suppliers.

A native of La Plata, and trained by renowned Argentine chefs Beatriz Chomnalez and Carlos Alberto “Gato” Dumas, Colagreco has been living in France since 2001. There, he revealed himself as a splendid up-and-coming chef working alongside outstanding masters of cuisine such as Alain Passard and Alain Ducasse. As time went by, his name began to stand out and great new restaurants started to bear his signature. In addition to Mirazur, for example, he opened Grand Coeur in Paris, and L’Estivale by Mauro Colagreco at Nice Airport, Côte d’Azur.

It’s also possible to eat from a Colagreco menu in Argentina, and at a much lower price. The chef opened three hamburger restaurants in his home country, serving dishes costing less than 400 Argentine pesos, or 5 dollars.

Despite already having reached the highest stratosphere of professional chefs, Colagreco’s work for good causes shows that, like the produce he grows, his roots are firmly in the ground. Clarin reports that Colagreco recently told the audience of a teleconference,

“We’ve cooked in Mirazur for the hospital in Menton and for homeless people. We have a commitment and a responsibility because our restaurant is a reference point on the vanguard, but we also have to be an example of values.”