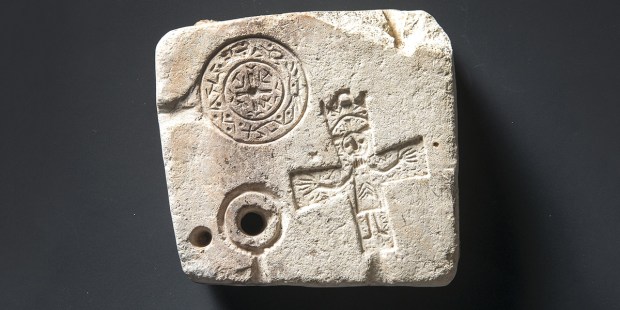 The rare find is one of only four examples of early Christian jewelry crafting in the region.

Archaeologists working to uncover a site in Switzerland have discovered an ancient concrete mold, used for making jewelry, that is emblazoned with Christian symbols, leading experts to suggest that it was a tool for making early Christian decorative adornments.

Swissinfo reports that the small mold, measuring just 9 x 8.5 x 3 centimetres, could produce up to seven different types of jewelry, including necklaces, earrings, and a crucifix. Photographs of each side of the mold book, which would have been pressed together during the casting of the jewelry in order to form the shape and images on both sides, show a detailed crucifix with the figure of Christ stretched across it, a crown atop the simple figure’s head.

The report goes on to date the piece to between the 9th and 10th centuries, and explained that the mold is a rare find in the Swiss region, with only three other examples of similar archaeological discoveries.

The excavation has continued since the mold was discovered, and the team has gone on to unearth a small artisanal district dating from the Middle Ages. The work is being conducted at a site that was until recently a prison. The excavation is scheduled to continue through the fall, leaving plenty of time for further discoveries.