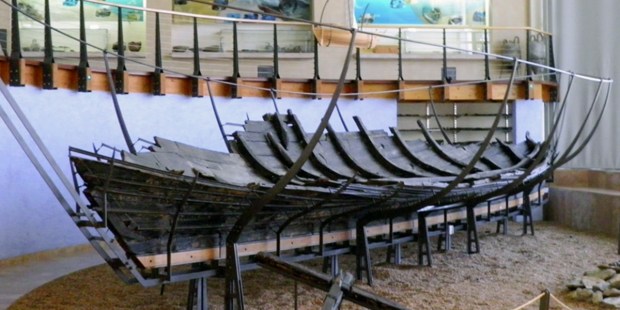 The crew may have represented a variety of religions, a rare example of ancient interfaith unity.

A study of an 8th-century shipwreck off the coast of Israel has offered experts a wealth of information on the construction of ancient Mediterranean vessels, as well as early interfaith interaction. Known as the Ma’agan Michael Ship, the site was discovered in 1985, but the excavation is only just nearing its end.

The Jerusalem Post reports that the 1,300-year-old ship sank just a couple dozen meters from the shore. The remains of the cargo are still intact, offering six different examples of amphorae (Greek and Roman styled pottery), two of which are the first of their kind to be discovered. The assorted items have been determined to have been either Byzantine or Islamic in origin.

The ship itself is a prime example of “shell-first construction,” which Deborah Cvikel, an author of both academic papers regarding the shipwreck, told the Jerusalem Post would have employed joints and brace to hold the ship together. This type of construction is markedly different from the “‘skeleton-first construction” of the 5th and 6th centuries, showing the development of the methods of shipwrights of the era. The Ma’agan Michael Ship also contains the only example of a wooden, one-armed anchor with a lead-filled stock.

The presence of commercial items from both Christian and Islamic empires has challenged the notion that trade between these two early cultures was limited. Further examination discovered a variety of Christian symbols along with the name of Allah inscribed on both the wood of the ship itself and the pottery found with it.

It is precisely because of this mingling of religious symbols that the archaeologists studying the ship’s remains are unable to determine if the crew was Christian or Muslim. If it was a mix, then the ship could be a prime example of interfaith unity in the ancient world.

Visit the Jerusalem Post for the full story, or read the archaeologists’ report on the findings here.