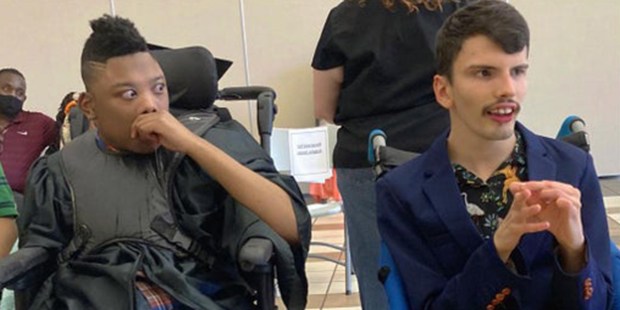 Given a low rate of survival, Odin and Jordan went on to prove the miracle of life.

Life is certainly full of surprises, and none more so when people manage to beat scientific odds to achieve more than was ever thought possible of them. And happily this was the case for 18-year-olds Odin Frost and Jordan Granberry.

The two boys from Texas were both given low chances of survival at birth due to brain damage, but they went beyond doctors’ highest expectations to become high school graduates this month.

Their story is actually particularly sweet, as their strong bond came about after meeting at a school for children with special needs at the tender age of three. Sitting together at Wayne D. Boshears Center for Exceptional Programs, the two boys became inseparable, even though they couldn’t actually speak, Odin’s dad Tim explained in a report with CBS News.

Tim also shared how his wife had to be induced during her pregnancy due to pre-eclampsia. “It was a really hard labor. When [Odin] came out, he was barely, barely breathing.” After spending two weeks in an NICU in Dallas , where incidentally Jordan had been two weeks beforehand, the family had to endure three years of medical visits in which doctors gave their son a two percent chance of survival.

Jordan had a similar story at birth, being deprived of oxygen he experienced brain damage. His mom Donna shared how doctors believed he’d not make it beyond his seventh birthday.

Yet, both boys went from strength to strength. Odin went as far as learning to walk with braces at the age of four, something his parents never believed would happen.

At school, although both were non-verbal, they became best friends, and music was a way in which they’d connect. “When my son started walking and Jordan didn’t, they had this connection still. My son would try to stand up and push Jordan’s wheelchair and stand beside him at all times and sort of defended him.”

The two families became close. Jordan’s mom, a hairstylist, was used to cutting the hair of kids with special needs, and she arranged a family hair cut once a month which gave them all the opportunity to spend time together.

Finally, 15 years after defying the odds, the two best friends got to graduate. As Tim said, the families had misgivings as to whether they should attend the graduation due to the pandemic. But he reasoned: “It’s a once-in-a-lifetime thing, let’s let them walk the stage.”

And walk the stage they did. Accompanied by his dad, and wearing matching shirts, Odin went to have his hard work acknowledged. Although he couldn’t express verbally how he was feeling, Tim said he could feel his excitement as he held his hand. Jordan came in just after his best friend to come up to the stage too.

“It’s something we thought would never happen. We didn’t think he was going to live … now he’s walking the stage and graduated,” Tim shared.

After the ceremony the boys sat together for a photo op, which bore a huge resemblance to the photo taken of the boys when they met 15 years ago. Their achievement is a testimony to the encouragement and devotion of the boys’ families to prove that where there is life there is always hope.

If you skip to 2:20 you’ll see the moment Odin walks the stage, followed by his best friend.